Fatehvir, who is the only child of his parents, fell into the unused borewell in a field on Thursday evening, when he was playing near his house in Bhagwanpura village. 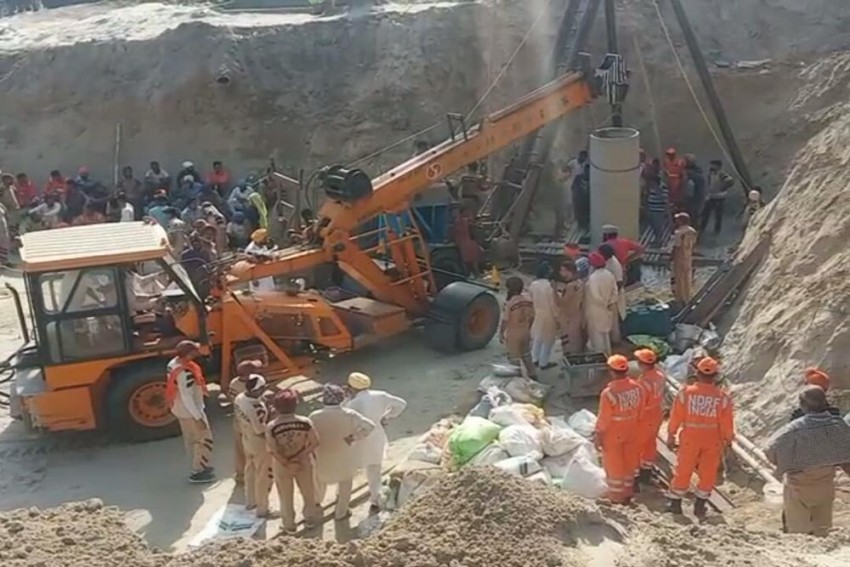 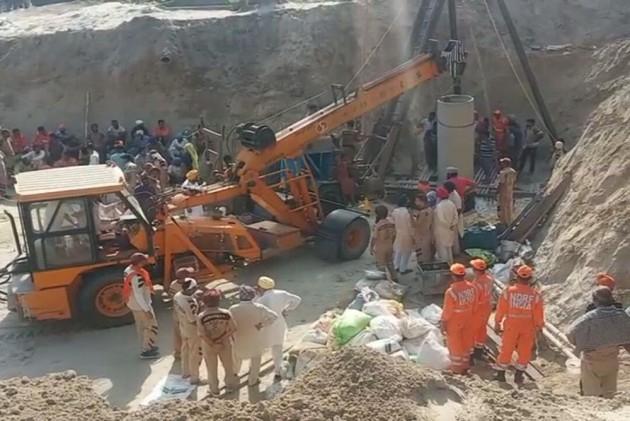 Two-year-old Fatehvir Singh on Monday remained stuck in a 150-feet-deep borewell in Sangrur, over 92 hours after he fell into it, with frantic rescue operations underway to pull out the toddler.

Fatehvir, who is the only child of his parents, fell into the unused borewell in a field on Thursday evening, when he was playing near his house in Bhagwanpura village.

The boy had accidently stepped on the borewell, which was covered with a cloth, officials said, adding his mother had tried to rescue him, but failed.

Despite rescuers being close to reaching the child on Sunday, he could not be retrieved so far as the rescue operation was confronted with some technical problems.

No food or water could be provided to the child after he fell into the borewell, officials said, adding oxygen was being supplied to him.

A team of the National Disaster Response Force (NDRF) assisted by police, civil authorities, villagers, and volunteers, were carrying out the rescue operation amid scorching heat.

Some volunteers were also extending help in this regard, officials said.

A parallel borewell has been dug by installing reinforced cement concrete (RCC) pipes of 36 inches in diameter to rescue Fatehvir.

Rescuers have planned to reach an appropriate depth, and then dig horizontally for about two to three feet to bring out the toddler from the other borewell where he is stuck.

Meanwhile, a large number of people from several parts of the state have assembled around the site and have been praying for the safety of the child.

Some of villagers also criticised the district administration, blaming it for alleged “delay” in bringing out Fatehvir from abandoned borewell.

“More than 90 hours have passed and district administration has failed to retrieve the child stuck in the borewell,” said a local villager.

Sensing anger of villagers, grandfather of Fatehvir urged people to be patient.

Police have erected barricades around the site to prevent people from coming to the rescue site. Heavy police force has been deployed to maintain law and order.
Punjab PWD minister Vijay Inder Singla said that NDRF, civil authorities, villagers and volunteers have been involved in rescue operations day and night.

“Our target is only to retrieve the child safely. All are working hard to bring him out,” said Singla who has been camping here.

Akali leader Parminder Singh Dhindsa, who visited the site, alleged that NDRF “lacked” required equipment to take out the child from the borewell.

“What I feel is that NDRF does not have the required equipment. Five days have passed and family is losing patience. We have so many modern techniques like laser technology which could help in dealing with such an emergency situation,” said Dhindsa.

Earlier, an NDRF team had tried to pull out the child with the help of rope but in vain.

The incident has again brought to fore the dangers posed by uncovered borewells, which have turned into virtual death traps for children.

In March, an 18-month-old boy was rescued from a borewell in Haryana's Hisar district, two days after he had fallen into it.

In 2006, a massive operation was launched to rescue a five-year-old child, Prince, who had fallen into a borewell in a village in Kurukshetra. He was pulled out safely nearly 48 hours later.