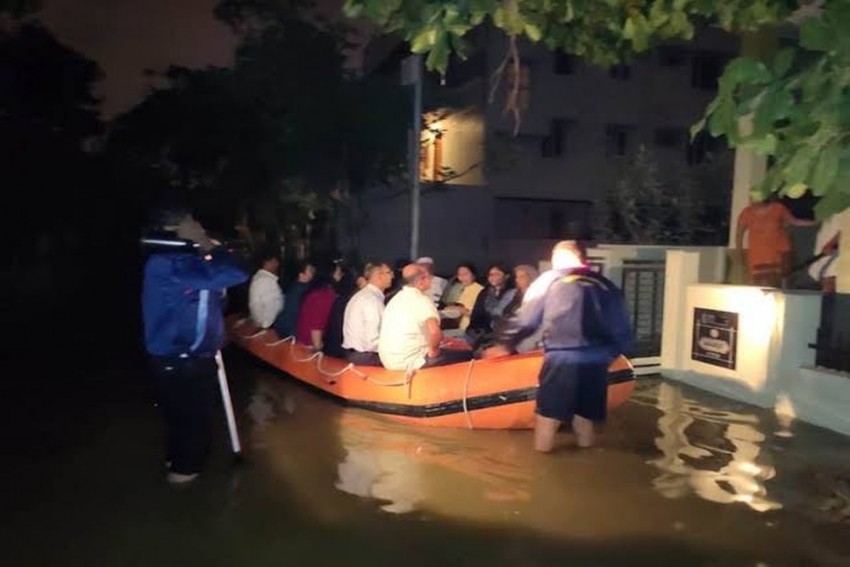 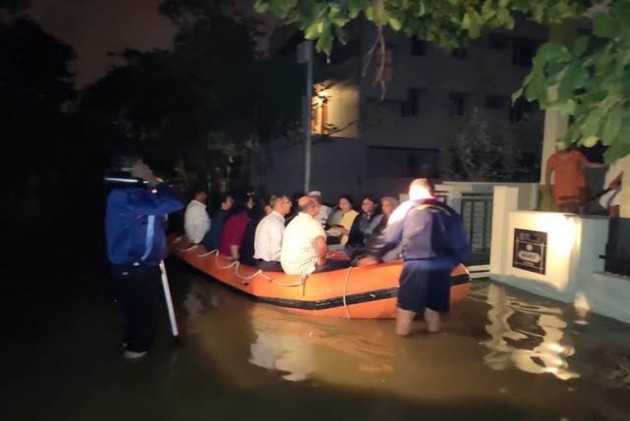 After a lake in Hulimavu in Bengaluru was breached on Sunday, leading to flooding of several houses, streets and apartment complexes, the city civic authorities on Monday said that they have filled the bund with a temporary embankment even as the daunting task of cleaning up entire localities was still underway.

The flooding took place on Sunday afternoon in Hulimavu in southern Bangalore, apparently when a contractor dug up the bund while carrying out some work -- initial reports said he was laying a pipeline but it isn't clear who authorised the work.

The civic agency, Bruhat Bengaluru Mahanagara Palike (BBMP) had set up a night shelter for residents whose homes were flooded.

"BBMP will coordinate with Food & Civil Supplies & Revenue Depts to help provide duplicate documents to those who lost them in the Hulimavu flooding," tweeted BBMP Commissioner B H Anil Kumar on Monday. The government has announced Rs 10,000 compensation to families affected by the lake breach.

Kumar said that workmen were strengthening the temporary bund by placing sand bags to prevent any further water leakage. Incidentally, this is the third time a lake has breached its bank in Bangalore in a month -- on November 10, water from the Hosakerehalli lake flowed into some houses closeby after a contractor had opened the bund to lay a pipeline. Prior to that, the Doddabidarakallu lake in north Bangalore breached its bund, indundating a few hundred houses downstream.

BBMP will coordinate with Food & Civil Supplies & Revenue Depts to help provide duplicate documents to those who lost them in the Hulimavu flooding. #BBMP #Bengaluru pic.twitter.com/2QowLQJHuU

Authorities said that the contractor who broke the Hulimavu bund fled the spot immediately and that efforts are on to trace him.

Most reports point to the perennial blame game between the BBMP and the Bangalore Development Authority when it comes to managing lakes -- even in the case of Hulimavu, there's confusion over which agency actually oversaw the lake.

"This breach shouldn't have happened. So much of water has left the lake, it's unbelievable that it has reached this stage," Madhuri Subbarao, co-founder of the Bangalore-based group, Friends of Lakes, tells Outlook. "The thing is that nothing can happen in the lake territory without BBMP being informed. Vigilant residents know what is happening in every lake, even the smallest of things. This sort of thing is unacceptable."

"We require immediately the government to secure all the lakes in Bangalore," says Harish Kumar who heads Namma Bengaluru Foundation. This calls for fencing, proper lighting, security guards, cameras for monitoring and participation of local residents, he says. "Such incidents will continue to keep happening if we don't. We can keep on either firefighting these incidents or look at the larger issue and solve the systemic problems." he says.

Kashmir's Situation Not Normal, Will Deteriorate Further: Yashwant Sinha After Visit To Valley