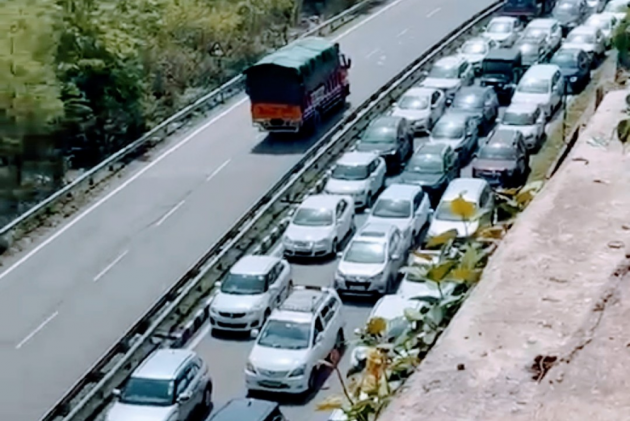 As Himachal Pradesh partially lifted its Covid-induced restrictions on Monday, thousands of tourists thronged the state, with Parwanoo– a foothill town and entry point to Shimla, reporting a record number of visitors.

More than 7,000 vehicles, mostly from Chandigarh, Punjab, Haryana and Delhi entered the state via Parwanoo, earlier today. This is the highest daily footfall the town has reported ever since the pandemic began last year. According to officials, 5,000 and 4,500 vehicles were reported at the checkpoint on Friday, and Saturday, respectively.

This development comes in the backdrop of the Himachal Pradesh government doing away with mandatory RT-PCR tests for those who enter the state.

The number of tourists visiting the state has been high since Friday. According to officials, as many as 21,000 vehicles were reported at the Parwanoo checkpoint since June 11. Further, chaos engulfed at the checkpoint on Sunday, after police started checking the visitors’ entry passes, which they are still required to display to enter the state.

Videos showing long queues at the checkpoint have gone viral with many raising concerns about a possible Covid surge in the state.

Meanwhile, Chief Minister Jairam Thakur has admitted that the unprecedented tourist rush needs to be taken stock of.

“I have taken note of the developments. The spike in the number of tourists has taken place after we did away with the condition requiring tourists to produce RT-PCR test reports at the borders. I have directed the state police and administration to not allow crowding and ensure that the Covid SOPs issued by the government are implemented,” he told Outlook.

Further, the CM also ruled out the reimposition of the RT-PCR test report rule for visitors. "We cannot reimpose it due to the Union home ministry’s new guidelines for states on border restrictions and mobility of people,” Thakur said.

However, some mechanism will soon be put into place to avoid overcrowding, he added.

Meanwhile, the Himachal Pradesh Police has directed all tourists to follow Covid norms and stated that failure to do so will result in a fine of up to Rs 5,000. Further, tourists found not wearing masks may even be arrested.

Meanwhile, those involved in the tourism industry are viewing the developments as a positive sign. The state’s tourism sector has suffered a big blow due to the pandemic.

Sanjay Sood, president of Shimla Restaurants and Hotels Association said that even though the state has reported a high number of incoming tourists in the last few days, not many are entering Shimla.

“Well even though more than 5,000 vehicles entered from Parwanoo, all of them are not tourists. This number could also include locals travelling back to Solan, Shimla, Kinnaur or elsewhere,” he said adding that the number of visitors can only be gauged by next weekend based on how many people are checking in at hotels and resorts.

The second covid wave had a disastrous impact on the state’s tourism industry with many hotels shutting down as the managements couldn’t pay EMIs and taxes. The tourism sector contributes 9 per cent to the state’s GDP.