A School Of A Different Kind, That Accepts Plastic Waste As Fee

An enterprising couple – Mazin Mukhtar of the US and Parmita Sarma, a local, have started a school of a different kind – Akshar Forum -- at Pamohi, a village next to Deepor beel. In a novel move, they started accepting plastic waste as school ‘fees’ from students. 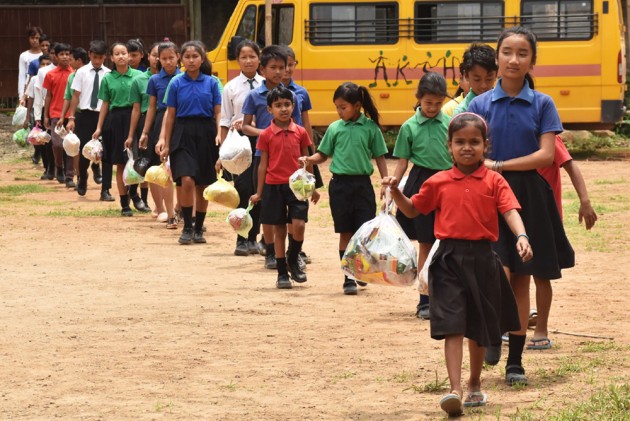 Fourteen-year-old Yuvraj Kashyap had hardly any idea of the ill effects of plastic waste on the environment till a few years ago. Yuvraj  lives in Boragaon, an area close to Deepor beel (water body), a Ramsar site on the outskirts of Guwahati, the main city of northeast India.

Yuvraj, his family members and neighbours never cared about disposing plastic waste properly. Many a time they would simply burn it or just throw it away. Like him, others would do the same, which posed a threat to the bio-diversity of the area, especially to the adjacent water body which is home to nearly 120 species of birds.

But today Yuvraj is not only aware of the ill effects of plastic waste but also takes active part in collecting such waste and recycling it.

The happy change is thanks to an enterprising couple – Mazin Mukhtar of the US and Parmita Sarma, a local.

The two have started a school of a different kind – Akshar Forum -- at Pamohi, a village next to Deepor beel. In a novel move, they started accepting plastic waste as school ‘fees’ from students.

“I carry the plastic waste, including water bottles, chips and biscuit packets to the school from my home. I didn’t know that by using these plastic wastes, we could create something new. No one was aware of the fact that plastic can be that harmful,” Yuvraj tells Outlook at the school premises.

Yuvraj said that even the neighbours have changed and have gradually understood about the deadly effects of plastic waste.

All the 100-odd students gather plastic waste of their households and carry it to school once or twice a week.

“This we started in October last year (2018). It’s a kind of fee, as in return they are given lessons in the school. Or rather it’s a homework. In whatever way you choose to put it, because, anyway, we don’t charge any fee from the students. It’s great to see the change…through the participation of the students,” Mazin tells Outlook.

Teens are tasked with collecting plastic waste from homes in the area surrounding the school, a model that can be replicated in every school to effect large-scale change, feels Mazin.

For Yuvraj and other students from the nearby villages it’s a great joy to see the new concept being implemented.

For parents like Minu Bora whose elder son Ankur Bora is studying in Class IX in the school, they have learnt many a thing through their children.

“We used to either burn or throw the plastic. But now we have known the ill effects of it. We are quite satisfied with the kind of education this school is providing to our kids,” Bora tells Outlook.

A School With A Difference:

Mazin, a native of the United States, met Parmita during a school project and they decided to come up with this unique concept of a school where underprivileged students can be provided quality education. And they can also earn while still learning.

Most of the students were either struggling to continue their studies due to poverty or were drop outs.

“Many of them were engaged in stone quarries and other works so that they can support their parents in whatever way they can. But we convinced them and their parents. Now, all of them are doing well and participate in all the activities in the school,” Parmita Sarma, a graduate from Tata Institute of Social Sciences (TISS), tells Outlook.

Gradually, the parents also realised the potential of the school and students started liking the teaching method. The students get their certificate from The National Institute of Open Schooling (NIOS). The school currently has 110 students between 4-15 ages.

The senior students are made to teach the younger ones and in return they are paid a small honorarium. This motivates the students.

“The seniors also take great pride in teaching and helping the junior ones. There is also a process of self-evaluation. These things keep them going in full energy,” said Parmita.

For the students, it’s a wonderful experience.

Gyandeep Rangshal, 14, who dropped out of school due to poverty and started working at a stone quarry before joining Akshar Forum, said that it’s a dream for him to be here.

“My father is too old to go for work. So, I had given up studies and started working. We are too poor to afford books and other stuff. But I think I’m lucky enough to be here. Now, I can read English and can also do Maths. I would like to thank Sir and Madam,” Gyandeep tells Outlook, adding that he wants to be a football player.

The students are also given training in sporting activities. “I have played a few tournaments. I’m not sure of my future but I would like to be a footballer,” says Gyandeep as his friend Yuvraj nods.

The curriculum combines carpentry with mathematics, solar technology with physics, embroidery with economics, teaching with psychology, recycling with ecology and landscaping with biology among others.

Akshar's campus, students and staff have also sheltered and found homes for 15 dogs, including injured and abandoned canines, in the first year of the campus Animal Shelter.

They were vaccinated, de-wormed, and cleaned up, then homes were found for them, with regular monitoring. Akshar takes care of all their medical needs, sterilization and post-op care.

“Teens are employed to take care of puppies’ feeding and medical issues, applying daily medicines, and to care for dogs for 10 days after their sterilization procedures, before they are sent home. Any reports of sick or injured dogs in the area are addressed quickly. If every school implements a similar model, we can end the suffering of street animals, while students learn empathy and basic medical care,” says Mazin.

The children love coming to school, so much so that they don’t want holidays!

“In my earlier school, our teachers used to beat us, but here it’s different. No one even bullies us. We just love the environment here. So, we love to come to school every day,” Seema Kalita, a student of Class V, tells Outlook.

Mazin says that student attendance is more than 95 percent. They have a vehicle which ferries the students from their homes.

Mazin and Parmita are introducing a fellowship called ‘Akshar Fellowships’ that will train talented graduates at Akshar Forum for several weeks and they will later try to implement the system in other government schools.

Akshar is training and deploying fellows to reform underperforming government schools, in partnership with local government and The Education Alliance.

“Fellows will work with school leaders and teachers to implement innovative methods for two years, leaving behind a transformed school with vastly improved outcomes. Akshar is on a mission to reform 100 government schools in five years. We are fighting for the eradication of poverty, through quality education,” says Mazin.