'A Single Woman Fighting Against All Atrocities,' Jaya Bachchan Calls For Re-Electing Mamata

‘Head broken, leg broken, but they have not been able to break her heart and the brain,’ Jaya Bachchan said. 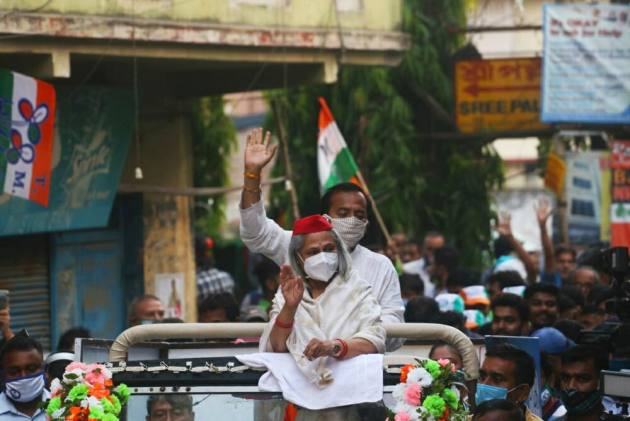 Actor and Samajwadi Party Rajya Sabha MP Jaya Bachchan called upon the people of West Bengal to reelect the state's two-term chief minister Mamata Banerjee. She will be campaigning for the Trinamool Congress (TMC) for three days.

"I have not come here for acting. I have come here because the leader of my party, Akhilesh Yadav, sent me to express our support for the TMC in this election," said Jaya, who comes from a Bengali family. Her maiden surname was Bhaduri.

She described Mmata as a “single woman fighting against all atrocities” and Bengal as “the safest state for women” while addressing the media from the TMC's state unit headquarters in Kolkata. She was flanked by outgoing Bengal minister Purnendu Basu and the TMC's Rajya Sabha MP Dola Sen.

A Battle For The Hindu Mind

"Head broken, leg broken, but they have not been able to break her heart and the brain and her determination to move ahead and make Bengal one of the best (places) in the world," Jaya said.

Notably, another senior Samajwadi Party leader, Kiranmay Nanda, who hailed from the East Midnapore district and had been a seven-time Left MLA-cum-three term minister before joining the SP in 2012, had also come to Bengal and campaigned for Mamata Banerjee in Nandigram Assembly constituency.

Jharkhand chief minister Hemant Soren, too, had campaigned for the TMC in the tribal population-dominated areas of the state.

Among actors, Mithun Chakraborty has been campaigning for the BJP. He, however, has joined the BJP.