A Staunch Leftist, Soumitra Chatterjee Spoke About Socio- Political Issues Through His Roles

Director Satyajit Ray chose Chatterjee to act in his political films such as 'Hirak Rajar Deshe' (1980), 'Ghare Baire' (1984) and 'Ganashatru' (1989) to bring various socio-political issues to the fore. 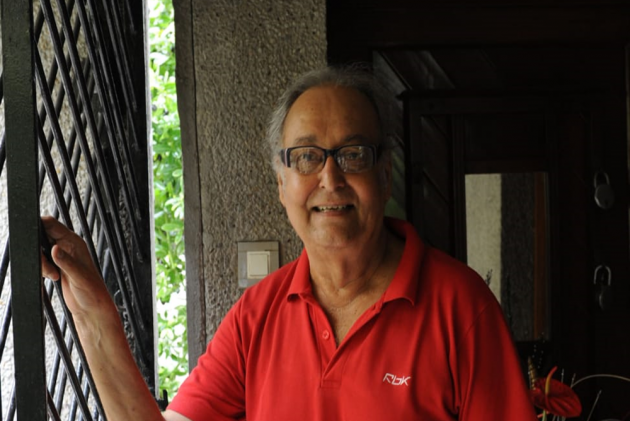 Iconic actor Soumitra Chatterjee believed that Leftist ideology was the only alternative to the present political situation in the country and he never flinched from expressing his ideological beliefs till the last day.

Director Satyajit Ray chose Chatterjee to act in his political films such as "Hirak Rajar Deshe" (1980), "Ghare Baire" (1984) and "Ganashatru" (1989) to bring various socio-political issues to the fore.

The title of the article Chatterjee penned for this year’s Durga Puja edition of Ganashakti, the Bengali mouthpiece of the West Bengal CPI (M), was "Ekhono Biswas Kori, Bamponthai Bikolpo (I still believe, Leftist ideology is the alternative)".

It was one of the last articles written by the thespian who died of post-COVID complications on Sunday.

Since the Left party started "Shramajibi Canteen" (Workers' canteen) during the lockdown period to serve food at a nominal rate for the poor at various places, Chatterjee regularly visited those canteens and extended his support to the cause.

Unlike many celebrities, he was vocal about his views and spoke out on controversial issues such as societal intolerance and the demonetisation exercise in 2016.

"He believed in Marxist ideology and he never shied away from expressing his political beliefs. Soumitra

Chatterjee was not just a colossus in Indian cinema, he was compassionate about people's movement and struggles at the same time," senior West Bengal CPI (M) leader Sujan Chakraborty said.

After the anti-land acquisition movement in Nandigram in 2007, when the state's intelligentsia was politically divided and a large section of them had hit the streets against the erstwhile Left Front regime, Chatterjee stood by the CPI(M), despite criticism from various quarters.

CPI (M) general secretary Sitaram Yechury condoled the death of Chatterjee whose association with the Left began during his college days during the late 1950s in Kolkata.

"Deeply grieved at the passing away of legendary Soumitra Chatterjee. His creativity fleshed out the nuances of complex characters that he depicted on screen, giving them a sense of immortality. Deepest condolences to his family & millions of admirers," Yechury tweeted.

Soumitra Chatterjee's death is a matter of personal grief. The entire Bengali film industry will be indebted towards him forever. Deepest condolences to his family," Bhattacharya said in a statement.

Mentored by auteur Satyajit Ray, Chatterjee in his several films reflected the socio-political issues of the Indian society.

He essayed the role of Udayan Pandit, a village school teacher, in Ray's "Hirak Rajar Deshe, which was considered a film against the Emergency era.

In "Ganashatru", Chatterjee played the character of Dr Ashoke Gupta who fought against social evils and superstitions.

In "Ghare Baire", a film based on a novel of Rabindranath Tagore, Chatterjee acted as a nationalist battling the British through the Swadeshi movement.

Chatterjee, who strode Bengali cinema like a colossus and took it to the world, died on Sunday after losing a 40-day battle with post-COVID ailments, bringing curtains down on the final chapter of the Bengali cinema's golden era. He was 85.