A Tale Of Two Maoists: Once They Were Against Democracy, Now They Are Defending It!

For the two former Maoists life has taken a 180 degree turn as earlier they used to attack polling parties and disrupt the polling process, but now they are part of the security team trying to safeguard the election in Bastar. 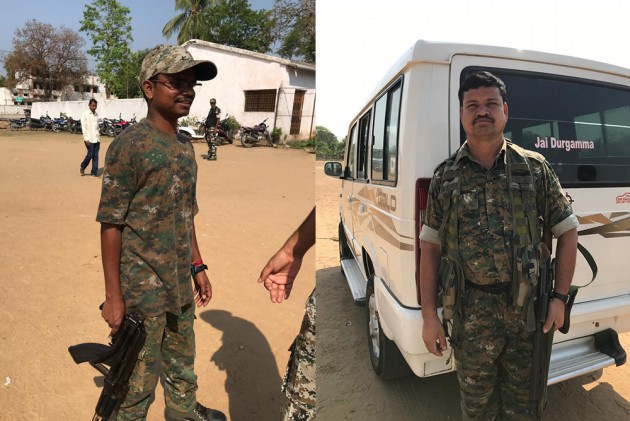 Two hardcore Maoists who had actively worked with Left wing extremists for over a decade are now protecting polling booths in Maoist-sensitive Sukma district, about 400 km south of Chhattisgarh state capital Raipur.

Arjun, who was Konta area Committee Commander and carried a cash reward of Rs 8 lakh on his head, gave up the path of violence and surrendered his arms in March 2019.

Both are now part of the police team that is entrusted with the responsibility to hold free and fair elections in Sukma district.

“Vetti Rama was associated with Naxals for the past 15 years, while Arjun was with Maoists for the past 12 years,” Superintendent of Police Sukma BS Maravi told Outlook.

They are very sharp individuals and are well versed with the operational tactics of the guerrillas, the SP said, adding their inputs are really very helpful.

For the two former Maoists life has taken a 180 degree turn as earlier they used to attack polling parties and disrupt the polling process, but now they are part of the security team trying to safeguard the election in Bastar.

Talking to local journalists, Arjun said it is “refreshing experience” and added that he has appealed to Maoists to shun the path of violence and be part of the democratic system.

A thick security blanket, comprising around 80,000 state and paramilitary personnel, has been thrown across the Bastar Lok Sabha constituency.

Seven candidates are in fray in Bastar constituency.

In related news, four Maoists were arrested and their firearms seized in Chhattisgarh's Bijapur district Thursday while polling was underway in the state's Bastar Lok Sabha constituency. The arrest comes as Maoists detonated an IED in Narayanpur district, which comes under Bastar, police said. Read the news here.