Ostracised in upper caste-majority village and guarded round-the-clock by CRPF, life for family is now a prison 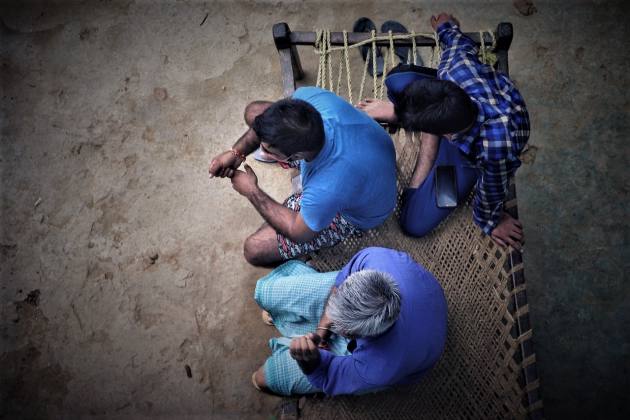 The house at the end of the narrow alley is nondescript, a simple brick-and-mortar building standing cheek by jowl with other similar residential structures in Bulgarhi, a small village in Uttar Pradesh’s Hathras district. Though the house is not more than half-a-century old, the village has been home to the Dalit family for generations—this is the place where eight of the family’s nine members were born and brought up. And this is the same place which has now turned into a ‘prison’ for the family of the woman gangraped and killed a year ago, allegedly by four upper caste men. Ostracised by the entire village, the family members are now ‘strangers’ in their own land.

“It’s my ancestral house…my forefathers lived here. But today, we are alien to the locals,” says the 52-year-old father of the victim. Only the victim’s sister-in-law is from another village. The village with an estimated population of over 600 is dominated by the upper castes. And like elsewhere in India, caste divisions are stark in this village too—the lower castes have always lived on the periphery of society with very little mingling with people of the upper castes.

And the incident of September 14 last year, when the woman was brutalised, allegedly by four upper caste men, the ostracisation has been complete. The family sees as it sort of a retribution against them for daring to accuse the “powerful upper caste people”. The four accused are in jail pending trial. They say that before the crime they were on talking terms with many people but September 14 everything changed.

“After we accused the upper caste men of rape and murder, they started threatening us with dire consequences. Since we have raised our voices against the upper castes, they hate us,” says the 29-year-old elder brother of the victim. “But since the day we got the security from the Supreme Court, the threats stopped. Today, no one even talks or visits our house,” he adds. There are just a few Dalit families in the village but they too have stopped interacting with the woman’s family.

Besides the victim’s parents, her two brothers, grandmother, the elder brother’s wife and their three children live in the house. The male members of the family no longer go out for work, forced to stay cooped up in the house under tight security. And the only time anyone steps outside is to buy ration from a nearby store.

“And even than we cannot go out without the security. Even if I am going to buy something from the general store, some of the CRPF personnel accompany us. Locals don’t feel comfortable interacting to us,” the father says. “I was working in a school. Both my sons were working in Delhi-NCR but after the incident, they came back. Since we don’t work, there is no source of income. We are surviving on Rs 25 lakh compensation from the government,” the father adds.

Villagers, on the other hand, seem to be more sympathetic to the family of the four accused. They claim that the four men didn’t have any criminal background.

“One of the boys was of shy nature. He used to stay at home most of the time and didn’t even intermingle with other village boys,” says one among a group of boys, aged between 10 to 15, who had gathered outside a nearby school.

Asked if they knew how the incident unfolded on September 14 last year, they expressed ignorance. “We don’t know what happened but it is hard for us to believe that they raped the girl,” says another boy in the group, adding, “That’s the reason they are completely secluded from us and no one wants to talk to them as villagers are upset with them. We believe that something else might have happened but they have framed these boys as they were not on good terms with the accused families.”

A villager, claiming to be from the potter community, says that many villagers are also envious because they have become VIPs with huge security. The locals also seem to be extremely upset with the media too.

When the Outlook team tried to speak to some village women, they either turned away or went inside the house without responding to questions. “This is because you people only talk about the victim and show their side of the story. Every media house who come here is interested in meeting the victim’s family,” said the villager.