While the BJP retained power in the Surat Municipal Corporation (SMC) by winning 93 seats, the AAP bagged the remaining 27 seats. 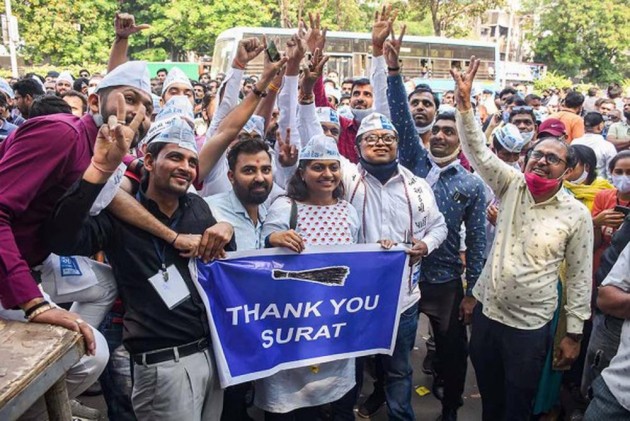 Kejriwal, who arrived in Surat on Friday, said that AAP would seek votes from the people of the state in the next Assembly polls to be held in 2022 based on the performance of the party's 27 newly-elected corporators in the city.

Polls to six civic bodies in Gujarat, including in Surat, were held on Sunday.

While the BJP retained power in the Surat Municipal Corporation (SMC) by winning 93 seats, the AAP bagged the remaining 27 seats. The Congress failed to win even a single seat.

During his address to the party corporators here, Kejriwal said, "The people of Gujarat are watching you with great hope. In our first attempt, AAP won 28 Assembly seats in Delhi and came to power. People trusted us because they knew that we are true patriots, as we were associated with Anna Hazare's agitation."

"In the 49 days of our rule, we did a lot of pro-people work. As a result, the people of Delhi gave us 67 seats in the second election. Now, six crore people of Gujarat will observe the work of 27 AAP corporators. If you perform well, I am sure there will be a huge revolution in 2022," the Delhi chief minister added.

Fearing a "poaching attempt", Kejriwal warned the elected representatives to inform the party leaders if "anyone from the BJP" contacts them over phone and gives an offer to
switch sides.

"I am sure that BJP people will call you. But remember, our true wealth is people's trust. If anyone of you switches side, it will break the trust of six crore people. Even if one person switches side, the BJP and others will get a chance to say that AAP is no different from others," he said.

The AAP convenor urged the newly-elected corporators to be ready to help the people of their respective wards, and also asked them to share their phone numbers in their areas so
that citizens can contact them easily.

"Even if you are not able to do someone's work, never insult those who approach you for help. Always show respect to the people. We will seek votes from the people of Gujarat on the basis of your performance here," he added.

Kejriwal is scheduled to conduct a road show in the city on Friday.