They were detained for questioning by railway police on March 19, and only after establishing there was no conversion involved, they were allowed to proceed. 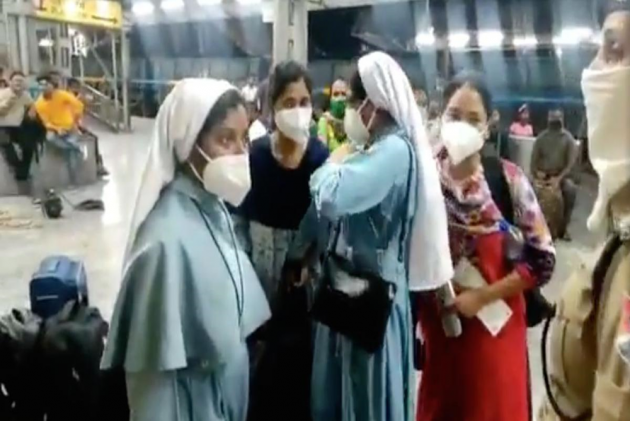 They were detained for questioning by railway police on March 19, and only after establishing there was no conversion involved, they were allowed to proceed.

"On March 19, we received a complaint on our helpline from a passenger of Utkal Express against two nuns travelling with two young girls in the same coach. Later, a written complaint was also received. After the probe, we found that there was no case of human trafficking or anything else. They were released and sent back to destination," a railways spokesperson said.

Detailing the sequence of events, an official said that on March 19, around 7:45 pm an information was received that two nuns were taking two girls in a suspected case of human trafficking by Utkal Express. On receipt of this information, GRP and RPF Jhansi jointly attended the train at 7:52 pm.

The matter was verified by GRP and found that allegations contained in the complaint to be untrue and they were allowed to leave, the official said.

Union Home Minister Amit Shah on Wednesday assured strong action against those who allegedly harassed the nuns belonging to a Kerala-based congregation during their train journey via Jhansi in Uttar Pradesh.

Noting that Uttar Pradesh was ruled by the BJP government, Shah, while addressing a poll rally here, said, "I want to assure the people of Kerala that the culprits behind this incident will be brought to justice at the earliest."

The issue was raised before Shah by party's Kanjirappally assembly candidate for April 6 polls, K J Alphonse, who is his former ministerial colleague in the Union Cabinet.

"Time for us as a nation to introspect and take corrective steps to defeat such divisive forces," the former Congress chief said.

Kerala Chief Minister Pinarayi Vijayan also condemned the incident and urged the Centre to take action, saying such incidents tarnish the image of the nation.

In his letter to Union Home Minister Amit Shah, Vijayan sought strict action against those "who disrupt and impair the freedom of individual rights" guaranteed by the Constitution.

"You would agree with me that such incidents tarnish the image of the nation and its ancient tradition of religious tolerance and practice."

Earlier, addressing the media in Pathanamthitta, Vijayan said the Constitution gives freedom to everyone in the country to believe and not to believe in any religion.

Everyone here has the right to live according to their faith, he added.

".. What happened yesterday was an encroachment on the freedom. Both these freedoms are fundamental rights of Indians. The nuns faced the violation of these rights during the train journey," he pointed out.