A former journalist, Chief Justice Ramana said during the launch of an application for granting access of virtual proceedings of the Supreme Court to media persons. 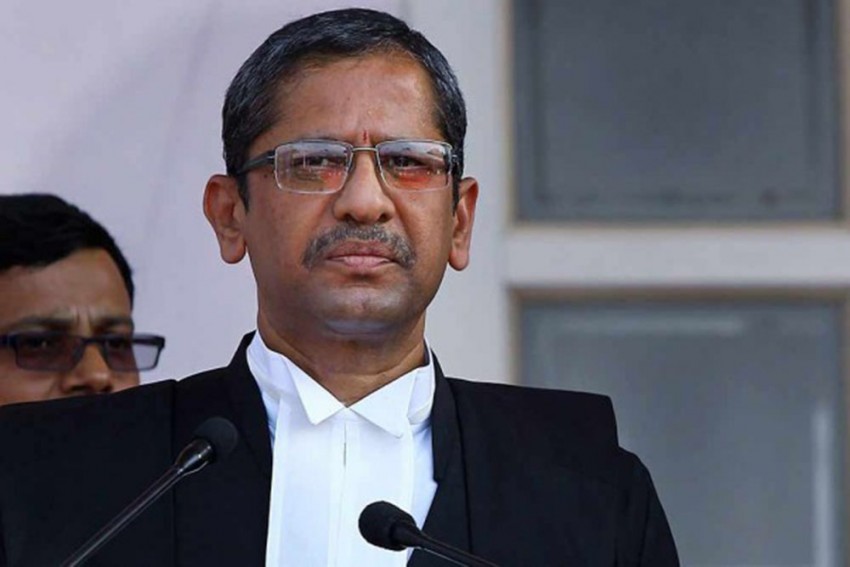 Chief Justice NV Ramana on Thursday said he was “actively” considering the proposal to live telecast the proceedings of the Supreme Court but would seek general consensus among his colleagues in the top court.

Ramana said this during the launch of an application for granting access of virtual proceedings of the Supreme Court to media persons.

The CJI, recalling his days as a journalist, said media faces great challenges in reporting and came to know that journalists were depending on advocates to get links to cover court proceedings.

Thus there was request to create a mechanism so that press could attend the hearings, he said.

"I was a journalist for a brief time. That time we did not have car or bikes. We used to travel on bus as we were directed not to avail conveyance of organisers of the event,” he said.

Urging the media to use the resources (app) responsibly and follow all Covid protocols, the CJI said  technology, particularly one that is newly developed, is sensitive and might be subject to some flaws in the early days of its use.

"Small issues are bound to arise, which should not be unnecessarily magnified. I request everyone to be patient, to be encouraging and supportive to the technical team to ensure that the application works without any problems. I hope that everyone gives the system the requisite time to evolve and expand.

"Additionally, I would like to also highlight another feature we are introducing today on the official website and mobile application of the Supreme Court. This new feature, called ‘Indicative Notes’ is aimed at providing concise summaries of landmark judgments in an easy-to-understand format. This will serve as a useful resource for media persons and the general public who wish to be better informed about the rulings of the Court," he said.

With regard to granting accreditation to media persons, Justice Ramana said he has given directions to further rationalise the policy and he was contemplating to appoint a senior officer to be a single point of contact between the Supreme Court and the media.

He thanked the apex court Registry, and the entire technical team, for all their efforts in developing this application and instituting the “Indicative Notes” feature in such a short time.

Justice Ramana said this pandemic has affected everyone and shared that as per the data available, 2,768 judicial officers and 106 judges of the high court have tested positive.

"So far as the Indian judiciary is concerned, as per the data available, 2768 judicial officers and 106 Judges of the High Court have tested positive. We are yet to receive the data from two major High Courts. 34 Judicial Officers and three Hon'ble Judges of the High Court have lost their life, battling this pandemic. My heart goes out to the families and the loved ones of those whose life has been cut short by this pandemic," he said.

Justice Ramana said the shift to holding courts through video conferencing has not been an easy process and the judges have faced various issues while attempting to hold hearings and decide cases.

“One of the issues that arose relates to the difficulties in access to video proceedings by the media. Earlier, some provision was made to allow the media to watch proceedings at specific locations.

However, due to certain difficulties and issues, many persons in the media had sent me requests to make changes to the system to enable them to observe court proceedings more conveniently.

The CJI said that transparency is a time-honored principle when it comes to the judicial process in our country and hearing of cases have always taken place in public courtrooms, with access being allowed not only to the lawyers and the litigants in a particular case, but also to the general public.

The only restrictions that were ever imposed earlier were because of space and security considerations, he said.

“Unfortunately, when COVID-19 struck, the systems which were earlier in place could no longer be relied upon. The judicial system has had to adapt quickly, in order to ensure that justice dispensation does not stop in the country,” he said.

Justice DY Chandrachud said many who made this app are our staff and they tested positive and all six of them were working on this.

"We hope that this facility which CJI unveils will keep you all safe. Journalists are exposed so much to outside world, Chandrachud said who is head of the Supreme Court's e-committee.

Justice AM Khanwilkar said the institution is paying back by offering this little gift which will be cherished in the long run which is temporary now but can be permanent in the future depending on the operational issues.

Justice Hemant Gupt also spoke on the occasion and said access to media to court proceedings will increase transparency and cautioned one should be careful in reporting.

There is a caveat that links given to you is used bonafidely and no unauthorised person use it, he said.