After the video of farmer's plight went viral, Sonu Sood promised a pair of ox to the farmer, but later said the family deserved a tractor. 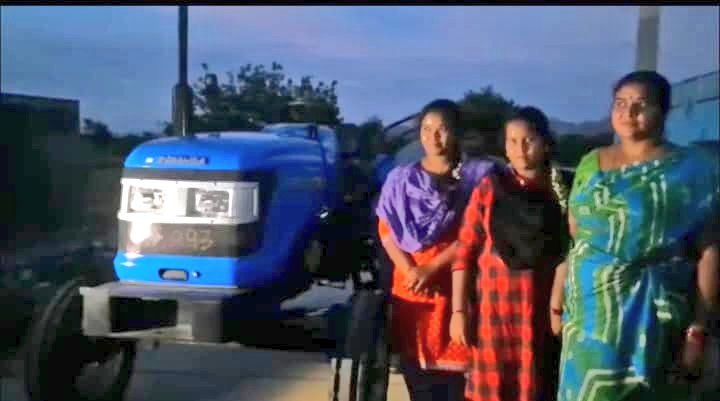 Reel life villain Sonu Sood turned real life hero once again, this time by gifting a tractor on Sunday to a farmer in a remote village in Andhra Pradesh to help him till the land.

The actor came up with the gift after coming through a video clip on Twitter wherein a tomato farmer in Madanapalle in Chittoor district was seen ploughing the land with his two daughters carrying the yoke on their shoulders.

In his instant reaction, Sood promised a pair of ox to the farmer, but later said the family deserved a tractor.

"So sending you one. By evening a tractor will be ploughing your fields. Stay blessed," Sood, who acted as a villain in numerous Telugu films, said in a tweet.

This family doesn’t deserve a pair of ox ðÂÂÂ..
They deserve a Tractor.
So sending you one.
By evening a tractor will be ploughing your fields ðÂÂÂ
Stay blessed âÂ£ï¸ÂðÂÂ®ðÂÂ³ @Karan_Gilhotra #sonalikatractors https://t.co/oWAbJIB1jD

True to his word, a new tractor was delivered to the elated farmer Nageswara Rao at his Mahalrajupalle village by Sunday night.

Also Read  | 'Nothing To Do With Politics': Sonu Sood Says He Works For Migrants Out Of Love

"Spoke with @sonusood ji and applauded him for his inspiring effort to send a tractor to Nageswara Rao's family in Chittoor district.

Moved by the plight of the family, I have decided to take care of the education of the two daughters and help them pursue their dreams," Naidu said in a tweet.

Rao's elder daughter completed her Intermediate while the second one passed Class 10.

Rao used to run a tea stall in Madanapalle before coronavirus left him out of business.

He returned to his native Mahalrajupalle village to take up agriculture once again.

Given his penury, he could not hire either a pair of bulls or a tractor to till the land, when his daughters volunteered to help him on the chores.

Their plight went viral on social media following which the actor stepped in with help.