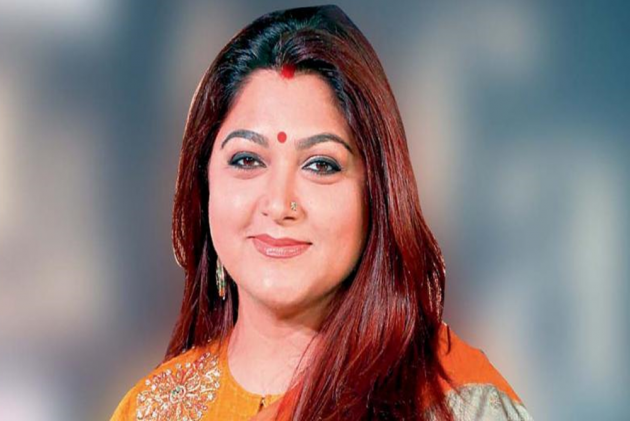 Actress Khushbu has joined the BJP in the presence of party president JP Nadda at Delhi. One of the most visible faces in politics from the tinsel world, she would bring an added dash of glamour to the BJP in Tamil Nadu ahead of next year’s Assembly elections.

Earlier in the day, while speaking to Outlook, Khushbu confirmed the news and said she will be meeting JP Nadda today at 1 pm today.  Asked why she was crossing over to BJP she replied, “I will let that known after my meeting.”

The 50-year old actress who was the national spokesperson of the Congress (she was removed on Monday morning) has been feeling side-lined and her switch to the BJP was anticipated after she welcomed the NEP. While moves were afoot to rope her into the BJP, the state Congress president K.S. Alagiri had reached out to her phone and convinced her to join the party protests against the farm Lawson Sept 28. She reluctantly joined the protests for a few minutes before leaving the venue in North Chennai.

In her resignation letter to Sonia Gandhi on Monday Khushbu complained that “few elements seated at a higher level within the party, people who have no connectivity with the ground reality or public recognition are dictating terms and people like me who wanted to work for the party sincerely, are being pushed and suppressed.” She recalled that she had joined the Congress when it was at its lowest after its defeat in the 2014 Lok Sabha elections and had not joined for “monetary gains, name or fame.”

Khushbu – the leading Tamil heroine of the 90s - had moved to the Congress from the DMK in November 2014 after Stalin’s supporters had staged an agitation in front of her house. She was considered close to the late DMK chief M. Karunanidhi and even used to call him “appa” (father). But Stalin had not relished the undue importance given to her in party meetings. In spite of his reservations Khushbu emerged as a star speaker and campaigner for the DMK. But she soon fell out with Stalin and left the DMK and after a small hiatus joined the Congress.

The Congress appointed her one of its national spokespersons and she articulated the party position and defended its leader Rahul Gandhi even as it faced electoral setbacks. Having been a doughty defender of the Gandhis and the Congress it is a real turn around for Khushbu who is equally felicitous in English, Tamil and Hindi (she is originally from Mumbai). “I am really saddened. What more can I say?” asked EVKS Elangovan, former TNCC president who had drafted her into the Congress and was her political mentor in the state.

The Tamil Nadu BJP has been inducting people from cinema and television, civil and police services and even the daughter of sandalwood brigand Veerappan amidst much fanfare. It is following a clear plan of action to popularise the party which has been unable to make headway in the Dravidian land. Khushbu’s arrival would give the party the much needed heft and eyeballs in the coming days. She is likely to be given a party post in the state and also membership in one of the boards of the Central government.