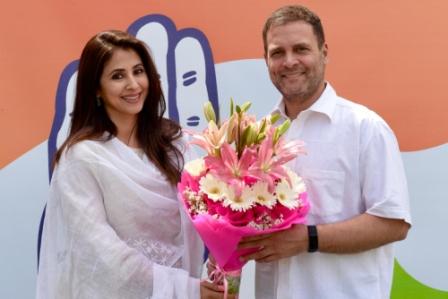 Bollywood actor Urmila Matondkar, most remembered for her leading role in the 1995 cult film Rangeela, joined the Congress party, on Wednesday. The actor is likely to be the party's candidate from the Mumbai North constituency in the upcoming Lok Sabha polls.

Matondkar had met Congress president Rahul Gandhi earlier Wednesday and was formally inducted into the party.

The 45-year-old actor said that while she had been brought up in a family that was committed to the Congress ideology, her decision to join the party was influenced by the constant strain that freedom of expression, even in the Indian film industry, had come under in recent years.

Her joining the party has triggered speculation on whether her political debut will also coincide with an electoral plunge. There is a buzz that the party may field her from the Mumbai North seat.

It may be recalled that the Congress had fielded Hindi film actor Govinda from the Mumbai North seat in the 2004 Lok Sabha polls. While Govinda had won the election comfortably, he had come under severe criticism over the following five years for being an absentee MP. The party had then replaced Govinda with senior leader Sanjay Nirupam in the 2009 polls.

Nirupam, who had been elected from Mumbai North, in 2009, had lost the seat to BJP's Gopal Shetty in the 2014 election. The Congress had, last week, decided to field Nirupam from the Mumbai North-West constituency, a traditional stronghold of the Grand Old Party.

Congress media cell chief Randeep Surjewala said a decision on whether or not Matondkar will be the party's candidate from the Mumbai North seat will be taken by the Congress Election Committee soon.