In wake of the ongoing political developments in Afghanistan since it was taken over by the Taliban last month, a large number of Afghan nationals living in India have been gathering outside the UNHCR office in Delhi to demand refugee status. 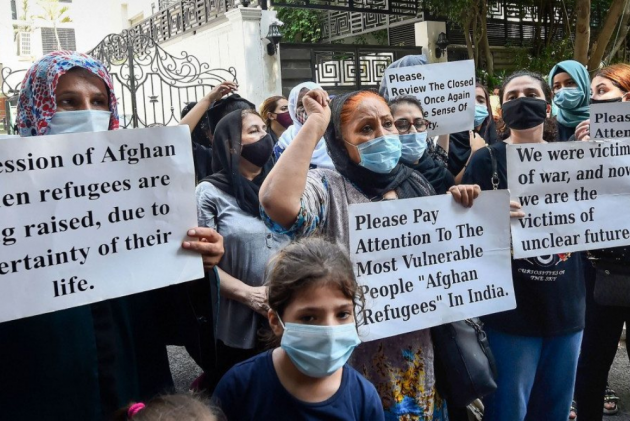 With just 28 fresh cases recorded on Wednesday, the national capital continued to log low numbers of Covid-19 cases and zero fatalities for the past four days on Sunday. However, the continuing gatherings of Afghan nationals outside the United Nations Human Rights Commission in New Delhi have led to concerns about a spike the infections in the city.

In wake of the ongoing political developments in Afghanistan since it was taken over by the Taliban last month, a large number of Afghan nationals living in India have been gathering outside the UNHCR office in Delhi to demand refugee status. While the protests have been peaceful, the mass gatherings have spiked concerns in India, with the Delhi High Court expressing concerns over the impact they will have on the spread of Covid-19.

On Wednesday, the court said that the demonstrations could act as a super spreader of coronavirus as there is lack of adherence to COVID-19 appropriate norms.

The high court further added that the situation cannot be permitted to continue as the protestors could be seen sitting and standing next to each other without even wearing masks and asked the authorities to act on it.

Justice Rekha Palli asked the Centre, Delhi government and police to coordinate on how the issue can be resolved and to see the gathering does not act as a super spreader of COVID-19.

Notices have since been issued to the Home Affairs and External Affairs ministries, Delhi government, Delhi Police, South Delhi Municipal Corporation and Delhi Jal Board on a petition by Vasant Vihar Welfare Association which stated that the foreign nationals (refugees/ asylum seekers) have gathered outside the office of the United Nations High Commissioner of Refugees (UNHCR) at B Block in South Delhi’s Vasant Vihar since August 15, including lanes and parks adjoining it and residents are facing difficulties due to this.

The point is that the general public is suffering because of this, the court said and asked the Delhi government to inform what it has done in pursuance to the Supreme Court’s direction to frame guidelines on the issue of the right to protest so as to ensure a balance between fundamental rights and the maintenance of law and order.

The petition said the number of such foreign nationals from Afghanistan has increased manifold in the past week owing to the takeover of Afghanistan by Taliban forces, forcing many to seek asylum in different countries including India.

Advocate Hrishikesh Baruah, appearing for the association, said the residents are facing difficulties in commuting and going to markets for purchasing essential goods and the manner in which the foreign nationals are protesting sitting next to each other is likely to be a super spreader of COVID-19 and sought to remove the protestors from there and clear the passage.

He said people are staying there, littering, defecating in the open and encroaching upon the area and they are probably not even vaccinated for COVID-19.

The petition, filed through advocates Shahrukh Ejaz and Nilotpal Bansal, also sought direction to the Ministry of External Affairs to frame appropriate policy for ensuring that such nuisance to the local residents does not occur on the account of foreign missions/ diplomacies being in the vicinity of residential localities.

Central government standing counsel Ajay Digpaul submitted that it was not a normal situation and the residents should have some humanitarian approach and these are international issues which cannot decided overnight as they have huge international consequences.

Delhi government additional standing counsel Satyakam said there are around 500 protestors at the side and sufficient force has been deployed there in day and night and Centre shall be asked to resolve the issue of foreign nationals at the earliest.

The high court asked the authorities to take instructions on how the issue can be resolved and listed the matter for further hearing on September 3.

“We are also dealing with COVID-19. Look at the pictures. What if this could be super spreader of COVID-19. What is this, there are no masks. You should ensure some protocol is there. Why are they not wearing mask. You are challenging people daily for not wearing masks in cars,” the court said.

The judge further said, “It is not the inconvenience only with which I am concerned. I am more concerned that it should not act as a super spreader of COVID-19 again. The city has barely coped with the second wave. You have to ensure that the protestors follow COVID protocol. Let them wear mask and then protest.”

The petition said the area has turned into a protest site where people from all age group including children are congregating and added that putting children in a situation especially where third wave of COVID-19 is imminent and is predicted to affect children more severally is extremely disastrous.

In absence of any arrangement by the authorities to settle these foreign nationals, they are dwelling on the lanes and park of petitioner’s vicinity while congregating in large number, thus, posing high health risk to the residents, it said.

It further said the Taliban takeover of Afghanistan has also pushed the Afghan refugees already living in India to desperation as they are left without any financial backing from their families and friends there.