The dogs served for about three years with the Indo-Tibetan Border Police (ITBP) commando contingent that guarded the Indian Embassy in Afghanistan capital Kabul and its diplomatic staff. 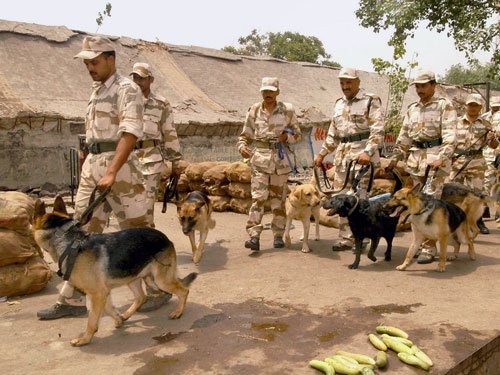 Officials on Wednesday confirmed incorporation of three combat canines, who previously were part of the ITBP commando security contingent in Afghanistan, in 'anti-Naxal operations unit operating in Chhattisgarh.

The three dogs, Roobi (a female Belgian Malinois breed), Maya (female Labrador) and Bobby (male Doberman) have been sent to a special dog kennel at the ITBP camp in south-west Delhi's Chhawla area after they landed at the Hindon airbase in Ghaziabad on Tuesday onboard a special military evacuation flight from the Taliban-controlled Afghanistan.

The dogs served for about three years with the Indo-Tibetan Border Police (ITBP) commando contingent that guarded the Indian Embassy in Afghanistan capital Kabul and its diplomatic staff.

"The three dogs detected many improvised explosive devices (IEDs) and protected the lives of not only Indian diplomats but also the local Afghan civilians working in the embassy."
"They will soon be deployed with ITBP units undertaking anti-Maoist operations in Chhattisgarh," an official source said.

The dogs were raised and trained at the ITBP national training centre for dogs (NTCD) in Bhanu near Chandigarh before being sent for the overseas duty.

The dogs were part of the 150 member Indian contingent, including 99 ITBP commandos, that took an IAF aircraft on Tuesday morning from the Hamid Karzai International Airport in Kabul to reach Hindon via a refuelling halt at Jamnagar in Gujarat.

With this de-induction, the entire strength of the force, that is primarily tasked to guard the Line of Actual Control (LAC) with China, has been withdrawn from that country including all the diplomats and Embassy staffers.

India had deployed over 300 ITBP commandos for securing its Embassy, consulates and diplomats in Afghanistan.

It was first deployed to secure the premises of the Kabul Embassy and its residents in November, 2002.

The detachments from the consulates have already been withdrawn after they were shut recently due to the current crisis in the country and also due to negligible footfall as the coronavirus pandemic gripped the globe.

Some of the commandos came back from Kabul in earlier flights.