‘What is happening in neighbouring Afghanistan is raising new questions in terms of security and our government is constantly monitoring the developments there,’ Rajnath Singh said. 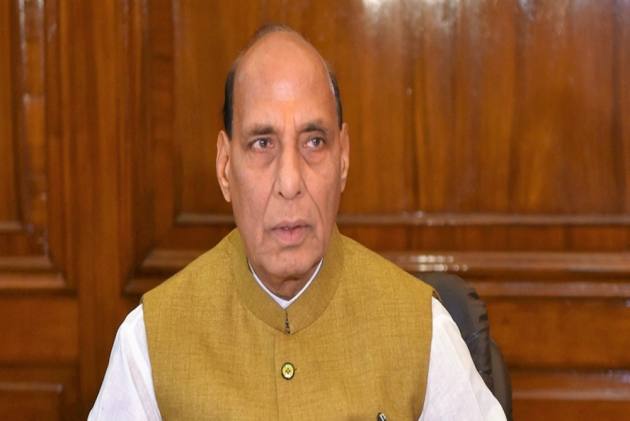 Defence Minister Rajnath Singh on Monday said that the current happenings in Afghanistan have raised new security questions. The government is alert and no anti-national force should be allowed to encourage terrorism from across the border by taking advantage of the situation, he added.

"What is happening in neighbouring Afghanistan is raising new questions in terms of security and our government is constantly monitoring the developments there," Singh said.

While addressing virtually the third Balramji Dass Tandon Memorial Lecture organised by Panjab University on the issue of national security, he also said the central government is capable of dealing with any situation.

Drone Attacks: How They Work

Along with the security of Indians, he said, "Our government also wants those anti-national forces do not encourage terrorism from across the border by taking advantage of the development there."

"We have some more concerns which can become challenges from the point of view of national security," he added.

The Taliban took control of Afghanistan on August 15, capturing all major cities in a matter of days, two weeks before the US was set to complete its troop withdrawal after a vexatious two-decade war. Earlier this week, an Islamic State suicide attack outside the Kabul airport killed over 180 people.

Singh said that the Narendra Modi government was alert and capable of dealing with any situation.

"We are always prepared to deal with threats arising from anywhere -- air, water and land,” he said.

The defence minister laid stress on continuously upgrading and updating the national security system to face new challenges and said that some new threats have emerged because of the development of modern technology.

He referred to the dropping of two bombs using drone at the Jammu air force station earlier this year.

"We have to continuously update and upgrade the national security system for new challenges,” said Singh.

He said the government's aim is to make the country prosperous, strong and secure. “Such an India that does not scare anyone but develops a sense of security among small nations and that India's growing power is not a threat to them," he said.

Singh also said that there was a trust deficit between India and Pakistan and the country needed to be vigilant of this fact from the point of view of national security.

Singh said Pakistan had understood that they would not make any gains from   violations of ceasefire agreements.

An agreement was signed between the Director General Military Operations (DGMO) of India and Pakistan to maintain ceasefire along the Line of Control in February this year, he said.

"We are also in wait and watch mode because the trust deficit between both the nations is a major problem,” he said, adding that no ceasefire violation by the neighbouring nation has taken place ever since the agreement was signed.

Pakistan understands that it is not in position to do much in Kashmir, especially after the nullification of Article 370, he said.

He said Pakistan had suffered defeats in 1965 and 1971 wars and these defeats completely proved that it was not in a position to launch a full scale war against India.

The minister said the inability to wage a direct war against India forced Pakistan to work on two policies -- on the one hand, the neighbouring nation took steps towards finding an atomic way and on the other hand, it started working on the policy of giving 'death by thousand cuts' to India.

Pakistan had commenced a proxy war against India, allowing their land for providing training to terrorists, money and weapons to target India, he said, adding that after 1980s Pakistan had become the “nursery of terrorism” in the whole world.

On Jammu and Kashmir, Singh said an effective action by Indian security forces to stop terrorism has been going on for the last seven years there.

"I believe that the remaining terrorism in Kashmir will also end. I have this belief because the strength and oxygen that the separatist forces used to get there due to Articles 370 and 35A are over now,” said Singh.

He said the Modi government neither does politics nor allows it to happen on issues related to national security, and added that a free hand has been given to the security forces in performing their duties.

"How high the confidence and morale of the army and security forces can be guessed from the fact that in the last seven years, they have not allowed a single major terrorist incident in the hinterland of India,” he said.

“India is not only taking action against terrorism within the borders of the country, the brave soldiers of our army have done the work of destroying terrorist hideouts by crossing the border if needed,” he said, referring to the surgical strike after the Uri terror attack and the Balakot air strikes after the Pulwama attack.

"Today we can say that Pakistan-supported model of terrorism is getting demolished in India,” he said.