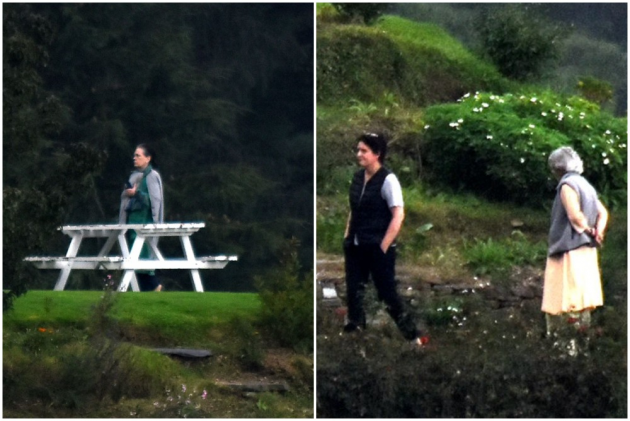 Call it a ‘summer retreat’ or family holiday in the backdrop of an abrupt exit of powerful Punjab Congress leader Capt Amarinder Singh from the Chief Minister’s post, Sonia Gandhi surprised many in the hill town of Shimla this morning.

The Congress president reached Chharabra, a high security area in the town to stay with her daughter Priyanka Gandhi Vadra, the AICC general secretary already holidaying at her bungalow for the past two days.

Senior security and state CID officials confirmed the arrival of Sonia Gandhi at 10.30 am after she drove from Chandigarh by road via Parwanoo-Shimla National Highway. Proper traffic arrangements had already been made.

Priyanka Gandhi Holidays In Shimla Amid Crisis In Punjab Congress

The Congress leaders when contacted said they have also heard about the arrival of 'madam' from the district administration. It's purely a private visit of Sonia Gandhi. There are also chances of Rahul Gandhi reaching by evening after Punjab Chief Minister Charanjit Singh Channi,” a PCC office-bearer told Outlook over the phone.

The Congress President flew to Chandigarh from Delhi early this morning and drove straight from the airport, without making a stopover or meeting anyone from the Congress or Punjab leadership.

Gandhi is expected to stay for the next three-four days. No official engagements have been issued although there are chances of her taking a trip to Oberoi’s five-star resort—Wild Flower Hall, located two km away from Priyanka Gandhi Vadra’s luxury cottage.

Earlier too, Priyanka along with her children and mother had been regularly arriving at the bungalow constructed a few years back after the state government granted permission to purchase land under Section 118 HP Tenancy and Land Reforms.

A cabinet member, when asked about Sonia Gandhi and Priyanka's stay, said  "We have provided necessary security to the VVIPs. They are most welcome to visit Shimla and enjoy the natural beauty and surroundings of the hills and the apple orchards".

“If Rahul Gandhi comes, it’s all good for the family to enjoy vacations to take a break from the party's turbulent time and also to overcome Punjab shocks. Making Capt Amarinder Singh resign was not an easy task for Sonia and Rahul but they have done it. Abb Shimla mein holiday to banta hai (They  deserve a holiday in Shimla now)," said Ganesh Dutt, a senior state BJP leader and Chairman of the PSU, HIMFED.