AMU students shouted slogans against the contentious law and police action on demonstrators in Delhi. 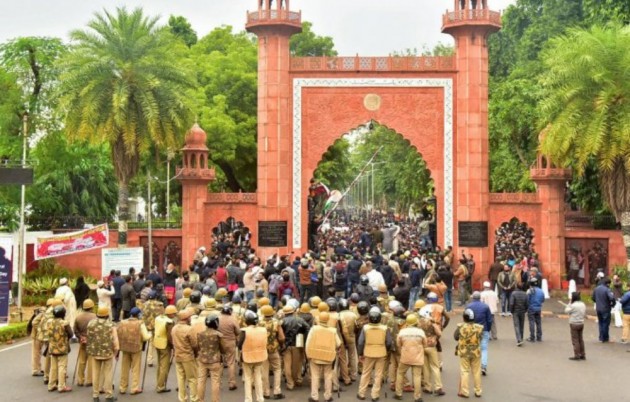 Hundreds of students of Aligarh Muslim University protesting against the amended Citizenship Act clashed with police at a campus gate, after which cops used batons and teargas to disperse them.

Soon after the protest near the Jamia Millia University in Delhi, the students started gathering at the Babey Sir Syed Gate and shouted slogans against the contentious law and police action on demonstrators in the national capital, PTI reported.

AMU Proctor Prof Afifullah Khan said some security personnel have been injured in brick-batting near the gate.

Police said the student broke down the police cordon. Police have sealed all gates to the campus.

Internet services have been suspended from 10 pm on Sunday to 10 pm on Monday in the Aligarh city, in view of the protests by AMU students, said Aligarh District Magistrate Chandra Bhushan Singh.

Tension prevailed in the area as police used batons and teargas to control the situation.

AMU Registrar, Abdul Hamid, told ANI, "The situation in the campus is tensed, some boys and anti-socials elements came and pelted stones, so we have requested police to take action to control the situation."

He added, "In view of the current situation, we have declared winter vacations today onwards. University will reopen on January 5 and examinations will be held after that."