All eyes, of course, will be on Congress president Rahul Gandhi. On Thursday, as trends for the Lok Sabha polls showed a landslide win for the Narendra Modi-led BJP, the Gandhi scion accepted responsibility for party’s decimation. 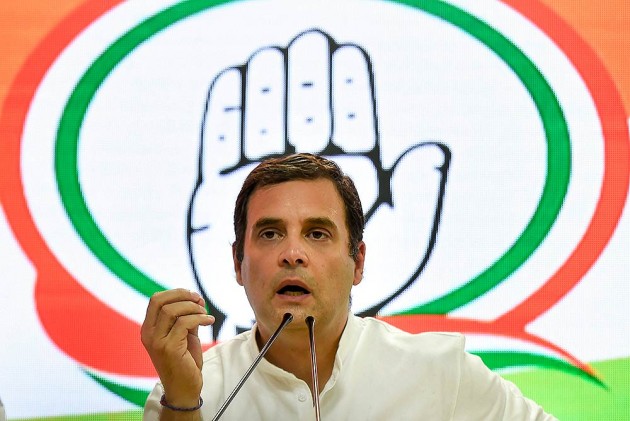 With the Congress Working Committee (CWC) set to convene its meeting on Saturday to discuss the continuing existential crisis after two successive Lok Sabha defeats, it is also expected to receive a number of resignation letters from state party unit chiefs.

All eyes, of course, will be on Congress president Rahul Gandhi. On Thursday, as trends for the Lok Sabha poll showed a decisive landslide win for the Narendra Modi-led BJP, Rahul had accepted responsibility for party’s decimation.

Earlier in the day, after consulting his sister and party general secretary for UP east, Priyanka Gandhi Vadra, Rahul had reportedly told his mother, UPA chairperson Sonia Gandhi, that he wanted to step down as Congress president with immediate effect.

Congress Fails To Get Leader Of Opposition Post In Lok Sabha, Again

Opinion | Congress Should Think Beyond Gandhi Family, Reinvent Itself For Survival

However, Sonia had told Rahul that the right platform for any such move is the CWC and as party president, it was Rahul’s responsibility to first place his decision before the committee members for a discussion.

If the party’s past record is any indicator of what lies ahead, the CWC is expected to reject Rahul's resignation.

It will then depend on Rahul’s own conviction if he still wants to go ahead with resignation, no matter what. Or will his resignation be mere posturing, aimed at bolstering the notion that he seriously blamed himself for the defeat and wanted to step down but had to bow to the wisdom of veterans who wanted him to continue the fight?

The other complexity facing the Congress is despite the merit in calls for Rahul’s resignation – though none from within the party so far – the grand old party may not easily find a non-Nehru-Gandhi alternative for the president’s post.

Priyanka, as Rahul’s replacement, Congress sources say, is “ruled out”. A senior party leader told Outlook, “Firstly, the CWC will not accept Rahul’s resignation, and secondly, if there is a suggestion for Priyanka to take over, the first person to turn it down would be Priyanka herself because she will never usurp her brother’s position."

"This has always been clear within the family. And, at this stage even if she does, it would only be counter-productive because of her own failure in the campaign and the message that such a switch would send – that the Congress can’t survive without a Nehru-Gandhi”.

There are, of course, no such limitations or complications as far as resignations of party's state unit chiefs go.

UP Congress president Raj Babbar, who lost from the Fatehpur Sikri seat himself, has already submitted his resignation after the party’s total rout in the state where only Sonia Gandhi managed to win from Rae Bareli while even Rahul’s Amethi fell to BJP’s Smriti Irani.

“The results are depressing for the Uttar Pradesh Congress. I find myself guilty of not discharging my responsibility in a proper manner. I will meet the leadership and apprise it of my views. Congratulations to the winners for winning the confidence of the people,” Babbar has said.

Of course, this isn’t the first time that Babbar has submitted his resignation. He had done so after Congress was demolished in the UP assembly polls too, but Rahul didn’t expect it. This time around, though, Babbar is likely to be relieved.

Odisha Congress chief Niranjan Patnaik has also put in his papers after the party drew a blank in the state in the Lok Sabha polls which showed Naveen Patnaik’s Biju Janta Dal still in command and the BJP capturing the Opposition's space comprehensively.

“Rahulji had given me the responsibility in consultation with the Congressmen of Odisha. I have tried sincerely to strengthen the Congress organisation in the state. Despite the efforts, we couldn't win people's confidence for which Congress has suffered this debacle in Odisha,” Patnaik told the media.

Besides Babbar and Patnaik, Outlook has learnt that resignations may also be offered by Rajasthan PCC chief Sachin Pilot and his Madhya Pradesh counterpart Kamal Nath. However, in Rajasthan, there could be calls to fix accountability for the wipeout across 25 seats on chief minister Ashok Gehlot, who failed to even have his son, Vaibhav Gehlot, elected from the Jodhpur seat. For Kamal Nath, the bigger worry is guarding the state government after the BJP wrote to the governor, saying a special session should be convened for Congress to prove majority.

Another leader, who is likely to offer his resignation, is Dinesh Gundu Rao, president of the Karnataka unit. The Congress was wiped out in Karnataka despite its pre-poll alliance with the H.D. Deve Gowda’s JD (S) with even veteran Mallikarjun Kharge losing in his bastion, Gulbarga.

There may be a move to replace Rao with Siddaramaiah, who had lost out to H.D. Kumaraswamy for the chief minister’s chair last year and has been playing truant for the Congress-JD (S) alliance ever since. Making Siddaramaiah Karnataka PCC chief, sources say, would be more of a way to mollify him.

There is still no word on whether Sheila Dikshit, who prevented the Congress-AAP alliance in Delhi, will be asked to step down. Under Dikshit’s leadership of the Delhi Congress, the party seems to have shown some revival, finishing second on five of the seven Lok Sabha seats in the national capital – a major achievement despite the rout since the party had been relegated to a distant third spot in all constituencies during the 2014 Lok Sabha polls.

Saturday’s CWC meet is clearly set to have a lot of drama. But the real question is if the meeting will conclude with something concrete to revive the grand old party's political fortunes.