Need a change in West Bengal to stop infiltration, says Union home minister Amit Shah at a BJP rally in the poll-bound state 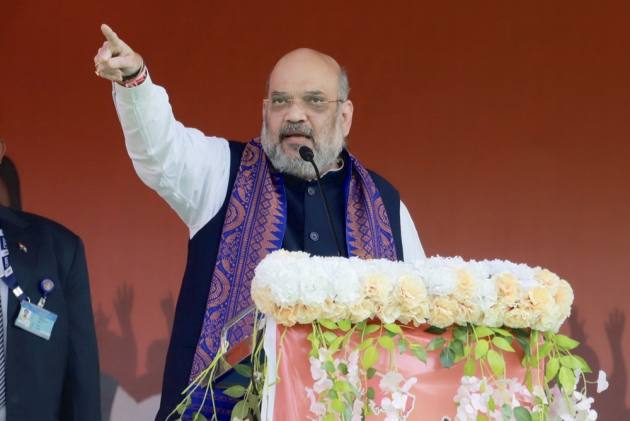 Ahead of the Bengal elections, the Bharatiya Janata Party has decided to up the ante against West Bengal chief minister Mamata Banerjee over her dislike for the slogan ‘Jai Shree Ram’, Following Prime Minister Narendra Modi, Union home minister Amit Shah, too, took jibes at her on this issue.

Modi In Bengal: ‘In Mamata’s Rule, Bengal Only Got Nirmamta’

What About CAA? All Eyes On Amit Shah's Bengal Rally

“Mamata didi takes insult in this. Why? Crores of people feel proud remembering Lord Ram. But you have a problem because you have to appease a particular community to get their votes. Why? Don’t these people who chant ‘Jai Shree Ram’ have their votes? I promise you, Mamata didi too would start chanting ‘Jai Shree Ram’ by the time the elections come to an end,” he said.

These recent jibes at the Trinamool Congress (TMC) chief come close on the heels of Banerjee who refused to speak at a central government event to celebrate Netaji Subhas Chandra Bose in the presence of Modi after a section of the audience greeted her with ‘Jai Shree Ram’ once she was invited to deliver her speech.

The TMC has repeatedly said that ‘Jai Shree Ram’ was not a religious slogan but a political one associated with the Ram Temple movement led by the BJP and its associated Hindutva organizations.

Shah was addressing a rally of supporters in Cooch Behar district of north Bengal, his first of the day in the state.

Earlier in the morning, he addressed a rally in Assam, where he met a separatist leader from West Bengal, Ananta Ray, who wants a separate state of Greater Cooch Behar carved out of parts of Bengal and Assam.

Wanted by the West Bengal police in a number of cases, Ray has been living in Assam over the past few years. He has been allying with the BJP.

He took digs at the Mamata on infiltration and appeasement.

“Do you think Mamata Banerjee’s government can stop infiltration? Can they? Let us form the government in Bengal. Forget any human being, even birds wouldn’t be able to infiltrate,” Shah said.

Shah was in Cooch Behar to inaugurate the fourth of the five Poriborton Jatras (rallies for a change) the party has planned across the state’s 294 Assembly constituencies. BJP national president J P Nadda earlier inaugurated three Jatras over the past few days.

In the evening he is scheduled to address a public gathering at Thakurnagar in south Bengal. At the rally in Thakurnagar, a hub of Hindu migrants from Bangladesh, Shah is expected to speak on the Citizenship Amendment Act (CAA), the rules for which have not yet been framed despite the Act having been passed by the Parliament in December 2019.