The GNLF, which was a dying force until a couple of years ago, is witnessing a revival, thanks to its partnership with the BJP 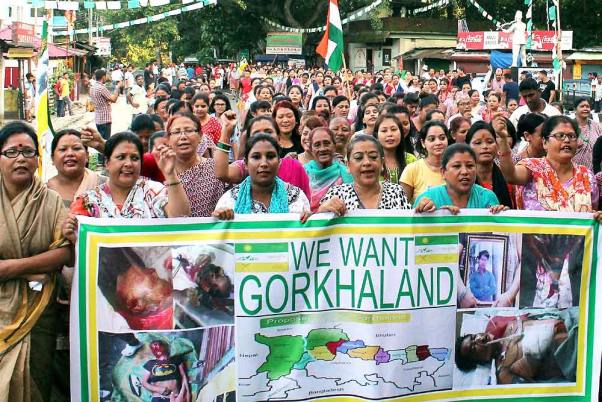 BJP’s Darjeeling MLA Neeraj Tamang on Saturday revived the demand for Gorkhaland even as the recent controversy over similar statements by a BJP Lok Sabha MP and two MLAs  refuses to die down in Bengal politics.

“We have submitted a memorandum to the governor seeking a permanent political solution to the problem of Gorkhaland. A permanent solution can only happen when Gorkhaland becomes a separate state or a union territory,” Tamang said after the meeting.

Gorkhaland is a decades-old demand for which the GNLF and its successor Gorkha Janmukti Morcha (GJM) waged violent struggles in phases since the mid-1980s.

Chief minister Mamata Banerjee is strongly opposed to the idea.While the GJM is at present split into two factions, both aligning with the TMC, the GNLF, which was a dying force until a couple of years ago, is witnessing a revival, thanks to its partnership with the BJP and the split in the GJM.

Over the past two weeks, a major controversy dominated the discourse in the media after the BJP’s Alipurduar MP John Barla demanded a separate state of north Bengal and two MLAs from north Bengal, Aanandamay Barman of Matigara-Naxalbari and Shikha Chatterjee of Dabgram-Fulbari supported his demand.

The BJP’s Bengal unit president, Dilip Ghosh, however, has said that Barla’s opinion was his personal one and that the party did not support any idea of partitioning Bengal.

Nevertheless, Tamang’s statement is likely to trigger another round of controversy over the BJP’s alleged plan to split Bengal.

Darjeeling and its surrounding areas are presently administered by Gorkhaland Territorial Administration (GTA), a semi-autonomous body which was created to end the GJM-led agitation between 2007-10.

Chief minister Mamata Banerjee had earlier said that she would never allow any compromise with the geographical integrity of the state. Bengal Congress president Adhir Ranjan Chowdhury, too, had lambasted the BJP for talking of partitioning Bengal.

The BJP in its 2019 electoral manifesto had promised a “permanent political solution” to the problems of Darjeeling but its leaders have not publicly supported the demand for Gorkhaland, ostensibly because it could badly affect the party’s prospect in the rest of the state.

In the recently concluded assembly elections, of the three seats in the hills, Darjeeling went to Tamang, Kurseong went to the BJP’s BP Bajgain and Kalimpong to one faction of the GJM that is presently running the GTA in understanding with the state government.