Trupti Desai had talks with several top police officials and all of them advised that it was not safe to travel to the temple town. 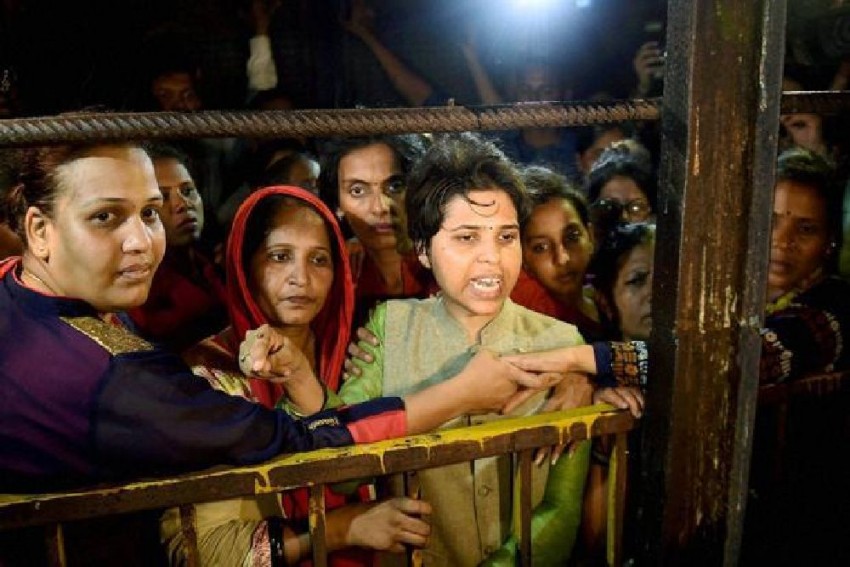 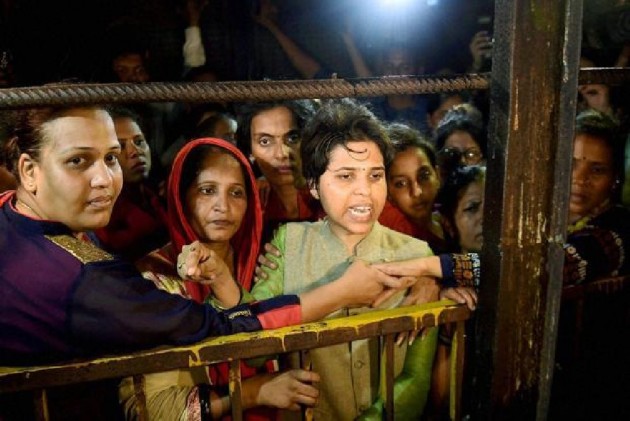 After a day-long standoff, Trupti Desai, the activists who stayed put at the Kochi City Police Commissioner's office with her team insisting police protection to visit the Sabarimala temple, decided to leave for the airport to fly back to Pune on Tuesday.

"For the time being, we have decided to leave. But we will return," Desai told the media after coming out of the Police Commissioner's office, where she was holed up since early morning.

The 2018 apex court verdict on Sabarimala was still valid and there had been no stay on it and so we decided to come and pray at the shrine, she said.

"We came here straight from the airport to seek police protection for our trip to Sabarimala. But they told us the issue was sub judice and hence they were unable to provide us security. I told them it's not true," said Desai.

During the day she had talks with several top police officials and all of them advised that it was not safe to travel to the temple town as there could be pepper spray attack or even acid attack, Desai said.

Desai took the decision after right-wing protesters returned to protest in front of the Commissioner's office after knowing that Desai was yet to leave and return to Pune and was adamant on praying at the Sabarimala temple.

After hearing about Desai's arrival in the morning, the right-wing activists began their protest. It was called off after the police assured them that she would not attempt to visit Sabarimala.

Desai and her team were holed up at the Commissioner's office for over 12 hours.

She and her team after arriving at the Kochi airport around 5 a.m drove straight to the Commissioner's office and sought protection to visit the temple, located about 200 km from here, even as the Pinarayi Vijayan-led Left government in Kerala has stated that it will not make any effort to ensure entry of women into the temple.

If Desai continued to be adamant on visiting the shrine, the police might shift her and her team to a nearby state-run women's home, sources said.

Her arrival was announced by the right wing-backed TV channel Janam. It also recorded her statement as soon as she landed at 5 a.m. at the airport. She said since the apex court had not stayed the verdict, they had come to pray at the temple.

"Today is the Constitution Day and with no stay on the entry of women, we should be allowed to pray at the temple," said Desai before entering the Commissioner's office.

Earlier in the day, terming Desai's arrival for a visit to the Sabarimala temple as a conspiracy, Kerala Minister Kadakampally Surendran said certain vested interests were behind her visit.

"It seems to be a scripted event with some vested interests behind it. It's part of a conspiracy to unsettle peace in Kerala," said Surendran.

According to Surendran, even experts see lots of ambiguity in the apex court verdict that came early this month. "When the verdict came last year, the Kerala government took a position as the verdict was clear. But this time it's not clear," Surendran said.

State Culture Minister A.K. Balan said the state government would not allow anyone to break the temple tradition.

During the day, Sabarimala devotees on spotting near the Commissioner's office Bindu Ammini, one of the two women who on January 2 became the first women in the 10-50 year age group to pray at the temple, vented their anger by spraying pepper powder on her. She was taken to a health facility by the police for medical attention.

Srikanth, a Hindu activist, has been taken into custody.

Though the Supreme Court, earlier in November gave a 3:2 verdict referring the Sabarimala review pleas to a larger seven-judge Bench, it maintained that it has not stayed its September 28, 2018 order allowing women of all ages to enter the temple. The temple bans entry of women in the 10-50 year age group.

Since the beginning of the two-month Sabarimala festival on November 17, seven women in the banned age group and from outside Kerala, who sought 'darshan' were not allowed entry to the temple by the police.

Devotees returning after praying at the temple, when heard about Desai's presence, turned furious and vowed to protect the temple traditions. "We will not allow anyone to break the tradition. All these activists are trying to destroy the sanctity of this hallowed temple," said an angry pilgrim.