After meeting Congress MLAs in Jaipur on Sunday, AICC general secretary Ajay Maken ruled out the possibility of contradiction among the party’s leaders in Rajasthan on the issue of cabinet reshuffle. 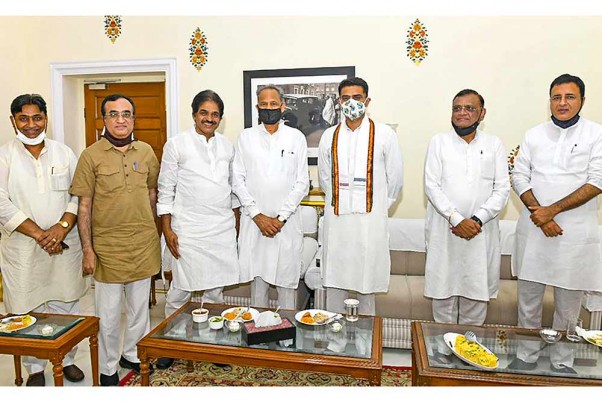 Jaipur: After Punjab, now it seems that the Congress high command has shifted its attention to Rajasthan. The meeting held by the party’s Rajasthan in-charge Ajay Maken and Congress general secretary (organization) KC Venugopal with chief minister Ashok Gehlot on Saturday night followed by another meeting with Congress MLAs on Sunday morning clearly hints that a long-running stalemate in the state's Congress unit might come to an end, with the intervention of party high command.

After meeting Congress MLAs at the Pradesh Congress Committee office in Jaipur on Sunday, AICC general secretary Ajay Maken ruled out the possibility of contradiction among the party’s leaders in Rajasthan on the issue of cabinet reshuffle. "They have expressed confidence and have unanimously left the decision of the cabinet reshuffle on the party high command", Maken told reporters outside the PCC headquarters in Jaipur.

However, without mentioning the dates for the cabinet expansion, Maken informed reporters that he will again be in the state capital and then decide the future course. "I shall be back in Jaipur on 28-29th July and will hold one on one interaction with the MLA's before finalising the names for district and block appointments".

When asked what were the issues discussed in the meeting, he said, " Issues like inflation and the Pegasus matter were discussed. The high inflation is causing suffering to the people of our country at a time when most of them have lost jobs owing to the pandemic. Instead of showing empathy towards the people, the central government is busy snooping on leaders, journalists and others".

The visit of the two stalwart leaders has come as a big hope for both factions of MLAs supporting Gehlot and Pilot respectively. "We are hopeful that the high command will take up issues in Rajasthan. The state is in dire need of fulfilment of the posts. The administration and development are hampered in absence of ministers and body heads. Even at the party, the workers, as well as the members, are feeling dejected. The only thing that rejuvenates them is appointments in blocks and districts", a senior Congress leader told Outlook.

The meeting held at the PCC office was attended by at least half of the Congress MLAs. "The invitation to attend the meeting came from Congress president Govind Singh Dotasara. Attendance was not compulsory, as the invitation said the MLAs who are in Jaipur can attend the meeting. It was an informal meeting with the two party leaders. Nothing substantial was discussed. Some of us received an invitation late night on Saturday while some received on Sunday morning.

On Sunday afternoon, Sachin Pilot in a reply to reporters’s questions on the cabinet reshuffle and party issues at a press conference during his constituency visit in Tonk said, "To address the party issues there is a different platform. This morning Rajasthan in charge Ajay Maken ji has made it clear that all MLAs trust in the decision taken by the high command. His words were loud and clear".

Cabinet reshuffle a tight rope for  the party leadership

The Rajasthan Cabinet currently has nine vacancies but it is turning out to be a tight rope walk for the party leadership to adjust all factions.  At present, there are 21 members in the council of ministers, including the chief minister. Rajasthan can have a maximum of 30 ministers.

As per the sources, on Saturday night both Venugopal and Maken held discussions on the issues of a cabinet reshuffle and political appointments with Rajasthan Chief Minister Ashok Gehlot at his residence in Jaipur.

Interestingly Maken and Venugopal are also the two members of the committee constituted by the AICC last year to present a report on the issues highlighted by Sachin pilot. However, this is the first time that they held discussions together on issues raised by Pilot with CM Gehlot. It's been more than one year since Pilot walked back into the party after its central leadership assured to hear him out following a three-member committee. So far, the committee is yet to submit its report. Since the formation of the committee, there has been a fragile truce between the two leaders.

On July 14, 2020, Sachin Pilot was removed as the deputy chief minister of Rajasthan and from his position as the state unit chief, party spokesperson, and two of his loyalist cabinet ministers Vishvendra Singh and Ramesh Meena were sacked from their posts in the state government. Pilot, who was the longest-serving president of the party unit in the state, was sacked by the party after he skipped the second round of meetings convened by Congress to discuss the political crisis in the state. The party immediately appointed primary education minister Govind Singh Dotasara as the new Rajasthan Pradesh Congress Committee president.