Congress president Rahul Gandhi did a lot of 'plain-speaking' in his surgical analysis of the role of several party leaders while himself offering to quit as the party president. 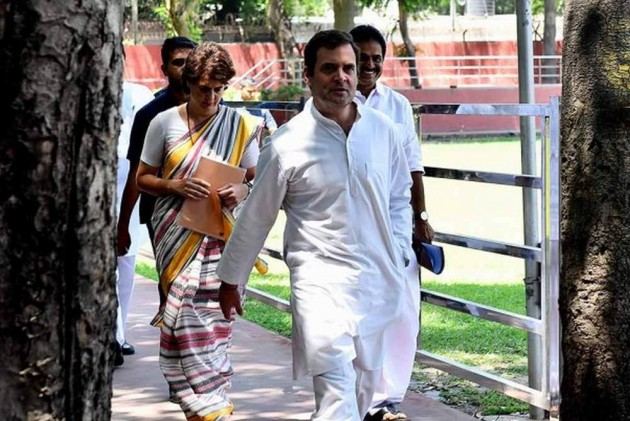 After Congress chief Rahul Gandhi gave Rajasthan Chief Minister Ashok Gehlot a tongue-lashing for putting his son above the party, several Rajasthan ministers and MLAs have demanded that accountability be fixed and action taken for the Lok Sabha poll debacle.

According to some of the leaders, who attended Saturday's Congress Working Committee (CWC) meeting, Gandhi did a lot of "plain-speaking" in his surgical analysis of the role of several party leaders while himself offering to quit as the party president.

Ticking-off Gehlot for camping in Jodhpur for his son Vaibhav's election, Gandhi said the chief minister spent days campaigning extensively for his son in Jodhpur and neglected the rest of the state.

Gehlot had reportedly taken part in over 130 rallies and road shows, 93 of them in Jodhpur alone. His son, however, lost to the BJP, which took 24 of the 25 seats in the state, with one seat going to its ally.

Asked about Gandhi's remarks at the CWC meet against him, Gehlot told PTI that they were "quoted out of context", but maintained that the Congress president "has all the right to make any remark he deemed fit, in party interest".

However, he did not give a direct answer when asked whether he would resign in the wake of the party's defeat in Rajasthan, barely five months after winning the assembly polls.

"Congress president has all the right on whatever changes he wants to initiate in the organisation or the governments, the working committee has left it to him," Gehlot said.

"For any leader in the country, priority should not be any position and the only priority should be how to revive and strengthen the Congress party and and how they can contribute," he said.

He said whatever the high command decides should be binding on all and "position should not be a priority for any leader".

After Gandhi's severe criticism, several ministers in the state have come out in the open, demanding fixing of accountability and action over the electoral drubbing just months after the party formed the government in the state.

Rajasthan Transport Minister Pratap Singh Khachariyawas said the CWC has given Gandhi full authority to fix the accountability and he will exercise that power.

Asked about Gandhi hauling up senior leaders for putting their sons over party, he said: "Rahul Gandhi ji has full right to say what he has to in the CWC. Nobody is above him and he would have said it after giving it full thought. All workers and leaders of the Congress respect his word. I also learnt from the media about it (Rahul's remarks)."

"If Rahul Gandhi ji finds fault with senior leaders, it is his right -- to fix accountability and take corrective steps," Khachariyawas said.

"Whatever Rahul Gandhi said is right...Action should be taken against those people who are responsible for this defeat so that a message goes to the workers. The Congress workers are also very angry," he said.

Meanwhile, Gehlot is in Delhi and met Congress general secretary in-charge K C Venugopal on Monday. However, what transpired in the meeting was not known.

Two state ministers have also come out in the open to demand a detailed assessment by the top leadership.

Cooperative Minister Udai Lal Anjana, and Food and Civil Supplies Minister Ramesh Meena have said the party should review the reasons for the defeat so that the party bounces back and performs well in upcoming local body elections in the state.

Meanwhile, there were reports that Agriculture Minister Lalchand Kataria has resigned after party's poor showing in the polls. However, there was no confirmation.

Several MLAs, speaking on condition of anonymity, said priority should be given to fixing accountability.

"The organisation worked really hard and brought the party to power. But within three months the people got upset with the government, the chief minister should take responsibility. He should have offered to resign," he said.

The rumblings in the party cadres comes after Gandhi, who left the CWC meeting abruptly and was adamant on not continuing as the Congress president, ticked off several senior leaders.

Rahul also said that Gehlot, Nath and Chidambaram spent days lobbying for a ticket for their sons.

Chidambaram's son Karti and Nath's son Nakul managed to win the Lok Sabha elections from their respective seats, but Gehlot's son Vaibhav lost the Jodhpur seat to BJP's Gajendra Singh Shekhawat with a margin of 2,74,440.

Even in CM Gehlot's Sardarpura assembly seat -- a part of the Jodhpur parliamentary constituency -- the BJP got better of Congress as also in Tonk, a seat that is represented by Deputy CM Sachin Pilot and falls in Tonk-Sawai Madhopur LS segment. In fact, the BJP was ahead in almost all the assembly constituencies of the ministers in the state.

The CWC meeting was held in the backdrop of the Congress winning just 52 Lok Sabha seats and drawing a nought in 18 states and Union Territories. Gandhi himself lost from the family bastion of Amethi in Uttar Pradesh, though he won from Wayanad in Kerala.

The Congress drew a blank in Rajasthan for the second consecutive Lok Sabha polls and the poll debacle came just months after its victory in the assembly polls in the state.

CWC sources said that when former Guna MP Jyotiraditya Scindia urged Gandhi to strengthen the state leaderships of the party, the party president quipped looking at Chidambaram, saying that "Mr Chidambaram threatened to resign if a ticket was denied to his son."

About Kamal Nath who was absent from the CWC meeting, Gandhi said, "Mr Nath said how could he be CM if his son was not fielded."