The VHP's working president said its mission was not just to build a temple at the birthplace of Lord Ram but to establish a 'Ram Rajya' as well. 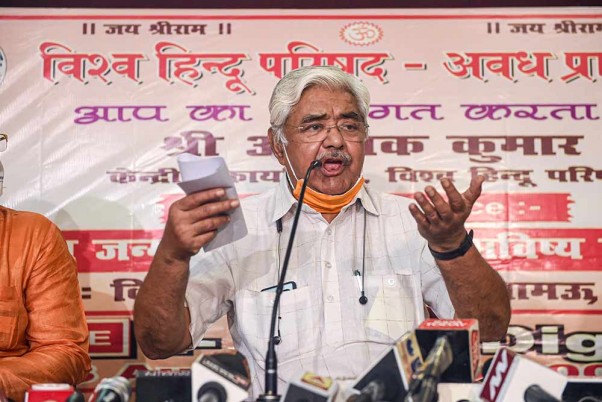 With the construction of Ram temple in Ayodhya set to begin on August 5, the Vishva Hindu Parishad (VHP) will now work towards making India a "Ram Rajya" and particularly focus on uplifting Scheduled Caste and Scheduled Tribe communities, its working president Alok Kumar said on Monday.

For the VHP, which spearheaded the Ram Janmabhoomi movement, the mission was not just to build a temple at the birthplace of Lord Ram but to establish a "Ram Rajya" as well, he asserted.

"There was no poverty and sickness during the reign of Sri Ram. The VHP will now focus more on establishing 'Ram Rajya', a harmonious society based on equality, where every person will be treated with dignity. Everyone would be assured of food, clothing and shelter along with education and gainful vocations," Kumar said.

The VHP leader said unless and until the society embraces Shabris and Nishadrajs and bridges the gap between "the high and the low", the dream of a 'Ram Rajya' cannot be realised. Shabri and Nishadraj are characters of the epic Ramayana belonging to lower strata of the society.

All sections of the society, besides the government, would have to work together to achieve the mission, he said, adding that the VHP would launch a campaign for this.

"The VHP will in particular expand its work amongst the Scheduled Castes and Scheduled Tribes and speed up its efforts for providing them better education, health and income generating facilities," Kumar said, adding that for this purpose the organisation should act as a "bridge" between the government and the people.

Terming social harmony an essential aspect of 'Ram Rajya', he said Lord Ram had constantly strived for it in his 14 years of exile. The VHP too is working to bring about a harmonious society.

Prime Minister Narendra Modi will perform the "bhoomi pujan" (ground-breaking) ceremony to mark the beginning of the construction of a grand Ram temple in Ayodhya on August 5.

The Supreme Court had in November last year paved the way for the construction of a Ram temple by a Trust at the disputed site in Ayodhya, and directed the Centre to allot an alternative five-acre plot to the Sunni Waqf Board for building a new mosque at a "prominent" place in the holy town in Uttar Pradesh.