The MLA from Madhya Pradesh said he firmly believed in the Gandhian principle of non-violence. 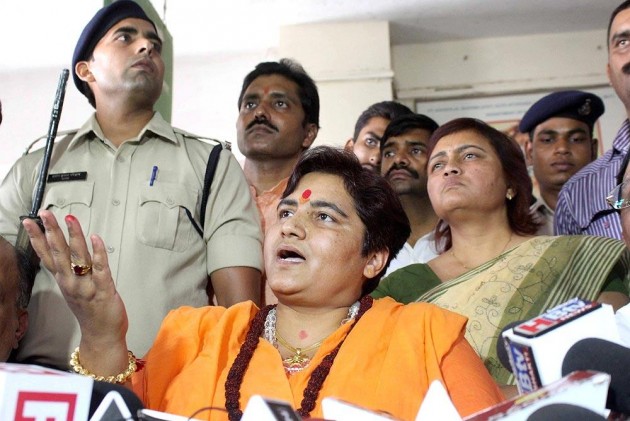 Even as Thakur drew flak from all political quarters, MLA Govardhan Dangi said on Thursday, "We criticised her...not only burnt her effigy but if she comes here we will burn her too."

However, he apologised on Friday for his controversial remark, saying it was a mistake.

The Congress MLA from Biaora in Rajgarh district said he firmly believed in the Gandhian principle of non-violence.

After staging a protest in Biaora, about 115km from Bhopal, on Thursday against Thakur's comment in the Lok Sabha, Dangi said, "Nothing can be more disgusting than praising Mahatma Gandhi's assassin." And then, he made the controversial remark threatening Thakur.

After a row erupted over his statement, Dangi told the media he followed Mahatma Gandhi's principles.

"I meant to say that the people of Rajgarh district will boycott her. There was some mistake in speaking. We are followers of Mahatma Gandhi's non-violence... I apologise for it," Dangi said on Friday.

The state Congress distanced itself from Dangi's statement.

"We follow the Father of the Nation's non-violence doctrine. The MLA realised his mistake and apologised," said state Congress spokesman Pankaj Chaturvedi.

Thakur's remark on Godse in the Lok Sabha on Wednesday has stirred a political storm with the Congress on Thursday staging protests in several towns in Madhya Pradesh, including Bhopal, her constituency.

The Bhopal MP on Friday tendered an apology in the Lok Sabha, but said her remarks on Godse have been twisted. She said her comments were in a different context.

During the Lok Sabha election campaign, Thakur, an accused in the 2008 Malegaon bomb blast case, had kicked up a row by describing Godse as a "patriot". She had apologised for that comment as well.