The Superintendent of Police of Karbi Anglong district in Assam, Debojit Deuri, and his security guards carried the body of the Covid-19 victim and cremated it on Tuesday, after the locals had refused to cremate deceased. 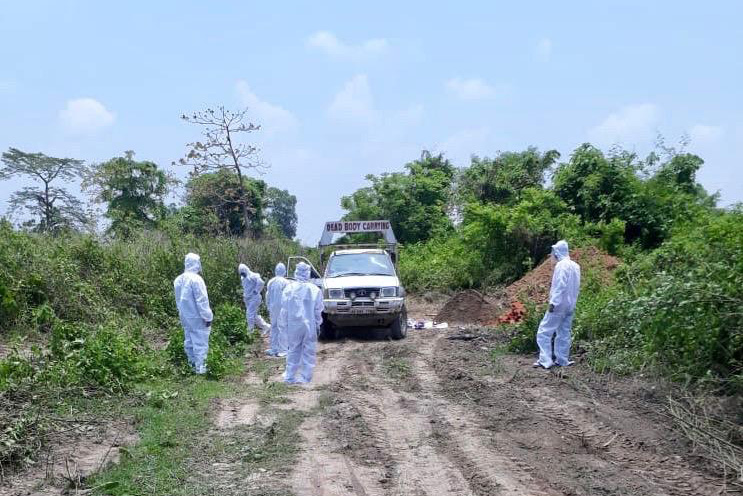 After locals in a village in Assam didn’t allow the body of a Covid-19 victim to be cremated, a top police officer stepped forward and gave the deceased a dignified farewell, winning the hearts for going way beyond the call of duty.

The Superintendent of Police of Karbi Anglong district, Debojit Deuri, and his security guards carried the body and cremated it on Tuesday.

Locals had opposed the cremation of the Covid-19 victim in Sunbora village, fearing for their health. Deuri went himself along with his personal security guards wearing PPE kits and performed the last rites of the deceased in Sunbora village.

“Someone has to take the responsibility. The person died on June 7 and we couldn’t wait further after June 9. It was properly covered. Taking all the protocols, I decided to go ahead. Instead of asking someone, why can’t we set an example that it’s not that dangerous if you follow the protocols,” Deuri told Outlook.

A sensitive and humane gesture from SP @karbianglongpol & his team, who went way beyond the call of duty & personally performed last rites of a #COVID19 patient, following all given protocols.

A family member of the deceased was also present to perform required religious rituals pic.twitter.com/AVc0vr4qYv

"We wanted to cremate the body last evening (June 8) in the designated area provided by the district Autonomous Council for Covid-19 victims at Athkilo. As the local people there opposed the disposal of the body fearing for their health, we could not do so respecting their concern," Karbi Anglong Deputy Commissioner Mukul Kumar Saikia said.

Some eye witnesses were quoted by local media as saying that even the personnel at the morgue of Diphu Medical College and Hospital declined to lift the body and shift it to a van.

“Donning PPE protective gear, Deuri along with his security personnel carried the mortal remains and performed the last rites,” said one of the eye witnesses.

In a similar incident, a doctor in Meghalaya, who died of Covid-19 in April, was not allowed to be buried by the locals. Finally, a church offered its land for the resting place of the doctor.