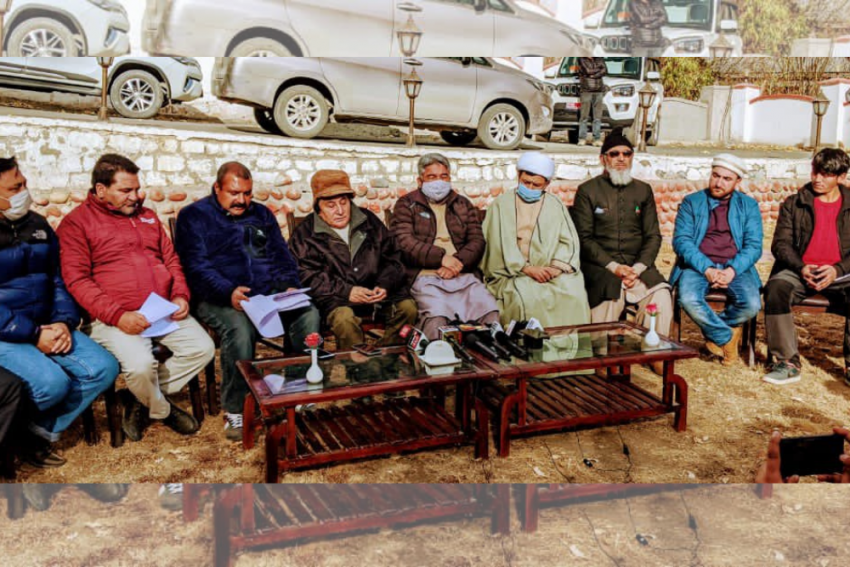 Four days ahead of the second anniversary of the abrogation of Article 370, the leaders from Kargil and Leh met for the first time today calling for full statehood for Ladakh with the legislature.  They also sought safeguards on the lines of Article 371. They said they reject any domicile law on the pattern of Jammu and Kashmir for Ladakh. They also sought two seats for the Lok Sabha from the region.

Addressing a joint press conference after the meeting, the Apex Committee of Peoples Movement of Ladakh chairperson Thupstan Chhewang and the Kargil Democratic Alliance Co-Chairman Asgar Ali Karbali asked for the full statehood for Ladakh, rejecting any imposition of domicile law on the pattern of Jammu and Kashmir in the Ladakh region.

They said the recruitment of around 12000 posts in the region should be made on the basis of the old state subject laws. They said they will join students’ unions in their programmes if their problems were not resolved. “Along with the statehood we need safeguards under Article 371 or under the sixth schedule of the Constitution for the land and the demography,” Karbali said. He said two parliamentary seats should be given to the region. “We will negotiate with the Union Government around these very issues and demands,” Karbali said.

Sajjad Hussain Kargili, a leader from Ladakh region, who was part of the meeting, told Outlook that the meeting assumes significance as it is the first time in the recent history of Ladakh when the political groupings from both the regions met and came up with unanimous agenda. “People of the region have realized that the UT status is not going to resolve our issues and concerns. It has failed miserably to fulfill the aspirations of the people of Ladakh,” he said. “In these two years, we have lost everything. No recruitment of our youth is taking place. We believe this bureaucratic Raj will not and cannot resolve issues of Ladakh,” he said.

After abrogation of Article 370, the apex body of the Peoples Movement for Ladakh, an amalgam of different political and religious organizations of Leh was formed to seek Sixth Schedule for the Ladakh. Later on, they held a meeting with the Home Minister. In June this year, they sought statehood for Ladakh instead of the sixth schedule.

Similarly, in October last year Kargil Democratic Alliance, an amalgam of different political and religious parties of the region based in Kargil emerged. They have filed a petition before the Supreme Court against abrogation of Article 370.

After talks between Prime Minister Narendra Modi and mainstream political parties of Jammu and Kashmir in New Delhi on June 24, the Ministry of Home had held talks with Kargil Democratic Alliance (KDA) on July 1.