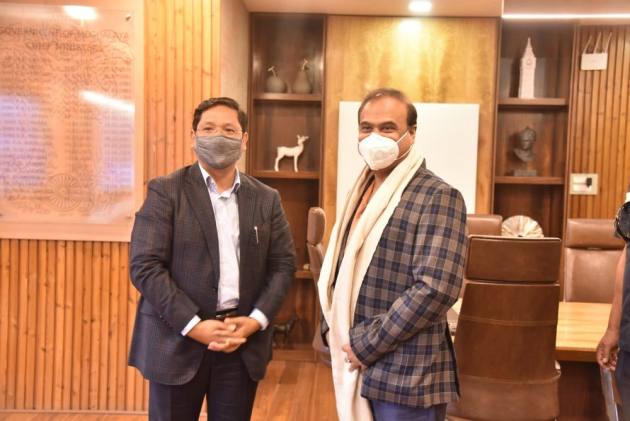 Assam and Meghalaya chief ministers Himanta Biswa Sarma and Conrad Sangma on Friday decided to go beyond status quo to resolve the decades-old border dispute between the two states, which has seen blood flow amidst intermittent skirmishes.

Speaking to reporters after their meeting at Shillong on Friday evening, Sarma said it was decided they would discuss all the 12 sites of dispute and the relevant merits and demerits of the claims and counter-claims one by one. “We will try and sort out the easier ones first. The entire matter cannot be settled at one go, but we will make a start,” he said.

Sarma said the discussion was fruitful and both appreciated each other’s position. “We arrived at an understanding that we need to go beyond status quo. It is not like the past when after such meetings it would be agreed upon to maintain the status quo. We are firm and committed,” he said.

He said they would meet again on August 6 in Guwahati for another round of discussion. “If required both of us will visit the 12 sites together to understand and appreciate our respective positions,” he said, adding that with the “grace of God and blessings of the people of both the states” they were convinced they would be able to resolve the festering issue.
Assam and Meghalaya share 885 km interstate border.

The meeting comes ahead of the two-day visit of union home minister Amit Shah to Meghalaya beginning tomorrow. Among other things, he will chair a meeting with chief ministers of all the eight states of the northeast to find ways and means to resolve the boundary disputes among some of them. He had earlier expressed hope that the issue would be resolved before the country’s 75th independence.

Assam has boundary disputes with Nagaland, Arunachal Pradesh, Nagaland and Mizoram besides Meghalaya. The dispute with Nagaland is in the Supreme Court.
Sarma had recently said that the dispute with Mizoram appeared to be intractable at the moment with a series of talks between the two states having failed. There have been several incidents of violence along the border in southern Assam since last year.

Sangma described the meeting as “historic” in that the Assam chief minister had visited the state secretariat for the purpose. “This is going to send a positive message to the people of the state that Assam is keen to resolve the issue. We have discussed the issue on multiple occasions, but today’s was official,” he said.

“The matter has been pending for far too long and people residing in the border areas have suffered. There has been violence and development has been lacking. We now need to find a solution,” he said while echoing Sarma saying they would go beyond status quo.