'BJP Will Form Next Govt In Bengal with Majority': Amit Shah In Kolkata 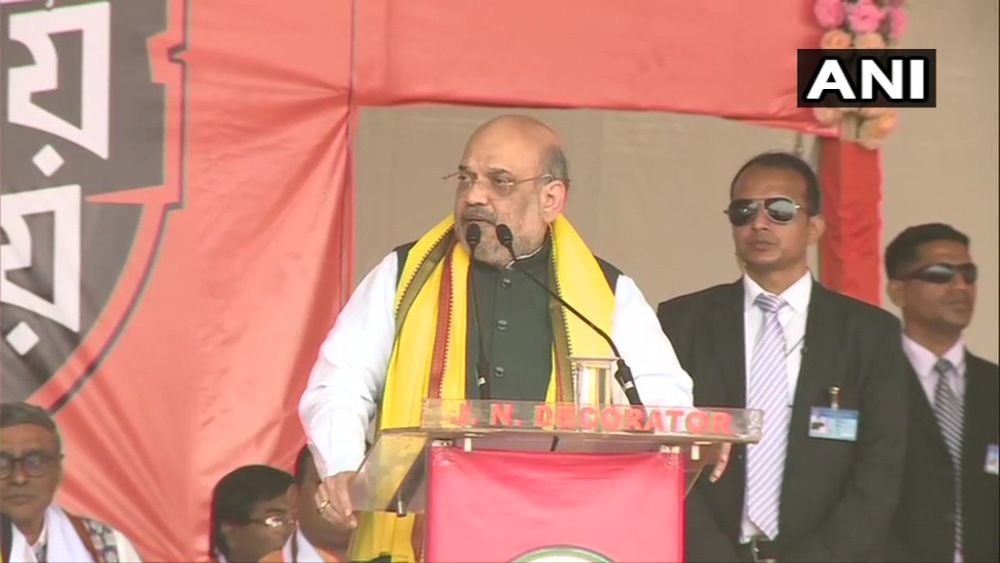 Ahead of local body polls, Union Home Minister Amit Shah launched a mass campaign --Aar Noi Annay (No more atrocity) -- by the BJP against the Mamata Banerjee-led Trinamool Congress government during a day-long trip in Kolkata on Sunday.

"Mamata didi goes to every village and asks 'Didi Ke Bolo.' They wonder what to answer. Today I have come here to tell you that don't sit quietly. Whenever Didi asks 'Didi Ke Bolo,' you say, 'Aar Noi Annay'," Shah Said.

He also exuded confidence that the Bharatiya Janata Party (BJP) will form the next government in Bengal with two- third majority after the 2021 assembly polls.

"We will form the next government in Bengal with two-third majority after 2021 assembly polls," Shah said, addressing a rally at Shahid Minar Maidan in the city hub.

Shah asserted that the Narendra Modi government will not stop until and unless all refugees in the country are granted citizenship under the CAA.

"The opposition is terrorising minorities... I assure every person from the minority community that CAA only provides citizenship, does not take it away. It won't affect your citizenship," the home minister said.

Shah was met with black flag demonstrations by Left parties and the Congress during his visit to the state.

"Now, after Modiji became the PM, we have developed a proactive defence policy segregated from the foreign policy," he said in Rajarhat, while inaugurating the new building of the NSG.

The visit of Shah, considered the number two man in the organisation and the Central government after Prime Minister Narendra Modi, is being seen as an attempt to energise the party rank and file and boost the saffron outfit's prospects in the coming statewide civic polls slated to be held around April, especially in the backdrop of its poor show in the Assembly bypolls held late last year.

The fears of a possible National Register of Citizens exercise unsettling the lives of millions, which the BJP's opponents cleverly played up, went a long way in spelling doom for the party in the bypolls -- an anti-climax after its heady show in last year's Lok Sabha elections.

Six months after winning a record 18 of the 42 Lok Sabha seats in the state, the BJP lost all three Assembly seats where bypolls were held, despite having taken huge leads in two of the segments during the general elections.

Since then, the CAA has been enacted by the Centre, with the Trinamool, Congress and the Left carrying out a shrill campaign against it.

Trinamool supremo and Chief Minister Mamata Banerjee have gone to the extent of saying that she won't allow "the draconian law" to be implemented in the state. Matching her political rhetoric, Banerjee wooed the Left and the Congress to support a resolution in the Assembly against the legislation.

In such a scenario, the state BJP has tried to counter its opponents' propaganda against the CAA with political programmes of its own, though opinions vary as to whether it has got the sort of traction the party would have liked.

"Our opponents are trying to sow confusion in the minds of the people, which Shah -- the man who piloted the bill -- will dispel. Being a political heavyweight, his arguments and assertions will have a huge effect," said a BJP leader.

"He will give a push to our pro-CAA campaign," state BJP General Secretary Sayantan Basu told IANS.

Political observers feel the CAA could be a game-changer either way in the civic polls, being considered the semifinal before next year's all-important Assembly elections.

Shah will also roll out the BJP's mass outreach programme "Aar noi anyay" (no more injustice) through which the party aims to connect with over five crore voters in the state in the next six months by holding the Banerjee government "accountable for its misrule".

"It is a protest against the injustice caused to the people of the state by the current regime. It will give the people a platform to express their anger with the Banerjee government," said state BJP president Dilip Ghosh.

During the campaign, the BJP workers will conduct a massive door-to-door campaign across the state and organise meetings in every village and municipal ward to discuss a chargesheet against the Banerjee government to be released by the party.

BJP workers will also distribute a "khobh patra" (letter of anguish) which the people would sign, besides airing their grievances through five technological mediums, including a missed call number and WhatsApp.

During the day, Shah will inaugurate the Special Composite Group Complex of National Security Guard (NSG) at Rajarhat in the northeastern fringes of the city, hold closed-door meetings with the state BJP leadership along with Nadda, and visit the famous Kalighat temple.