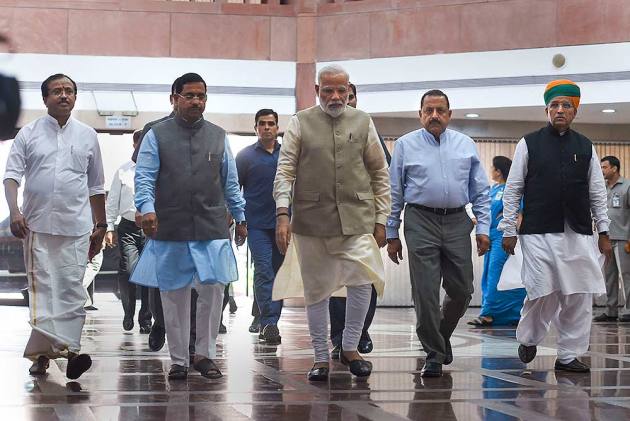 Prime Minister Narendra Modi on Saturday met over 40 economists and discussed the current state of Indian economy and took note of their suggestions ahead of next month's union budget.

"During the session, participants shared their views, in five distinct groups, on the economic themes of macro economy and employment, agriculture and water resources, exports, education and health," said a release issued by the Prime Minister's Office.

The Prime Minister thanked all participants for their suggestions and observations on various aspects of the economy.

The meeting came in the backdrop of economic growth slowing to 5.8 per cent in the fourth quarter of 2018-19 pushing India behind China.

The Congress party has been alleging that unemployment had reached a 45-year high under the BJP-led government.

Modi had met Secretaries of all ministries earlier this month and urged them to begin work on making India a five trillion US dollar economy.

Commerce and Industry Minister Piyush Goyal and Minister of State (independent charge) for Statistics and Programme Implementation Rao Inderjeet Singh were also among the attendees.

Finance Minister Nirmala Sitharaman will be presenting the full Budget for 2019-20 on July 5 in the Lok Sabha.

It will be first full Budget of the Modi 2.0 government.