With EPS As CM Candidate, AIADMK Looks For Continuity

Tamil Nadu Assembly Elections: This is the first time that the AIADMK has made a formal declaration about its Chief Ministerial candidate 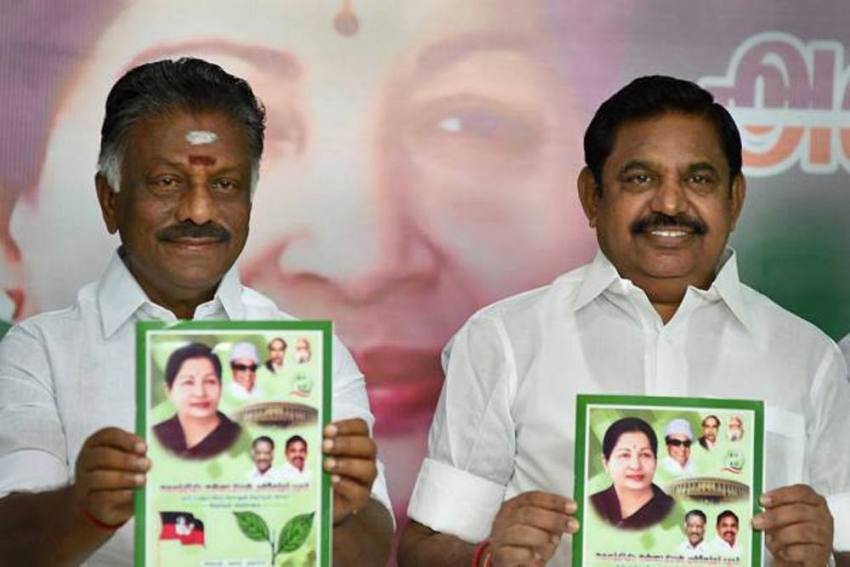 So, the accidental Chief Minister will take a shot at one more term – this time as the party’s official Chief Ministerial candidate. Edappadi K. Palaniswami, whose ascent to the CM’s post was an unexpected outcome of the post-Jayalalithaa convulsions in the AIADMK, will lead the party during the 2021 Assembly elections it was officially announced today.

The announcement was made by none other than Deputy CM O. Panneerselvam who till two weeks ago was reluctant to endorse EPS. But faced with the reality that EPS had grown with the job and had established his control over the government and party apparatus, OPS chose not to mount a challenge which would have led to a debilitating split in the party. Of course OPS was offered his sop in the form of an 11 member steering committee that he had been demanding since he merged his faction with the AIADMK in Aug 2017.

This is the first time the AIADMK has made a formal declaration about its Chief Ministerial candidate since in the past it was a given that the party’s two mass leaders – founder M.G. Ramachandran and his successor Jayalalithaa – were de facto CM candidates. While MGR was Chief Minister from 1977 till his death in 1987, Jayalalithaa – who was elected four times - saw her second and third innings interrupted by court verdicts that had unseated her temporarily with OPS stepping in as a standby. Jayalalithaa’s demise in December 2016, less than six months into her fourth term, resulted in a leadership crisis that even saw her friend Sasikala mount an attempt to become Chief Minister in Feb 2017 after toppling OPS only to be sent to jail by the Supreme Court in the infamous wealth case.

Truce Is The Only Option For EPS And OPS

Since EPS and OPS were seen as rivals gunning for the same job, the declaration of a CM candidate was needed to give a sense of continuity and reassurance to AIADMK cadres and the voters that the party had no second thoughts about continuing with EPS since many had expected the party to implode over this question. Though the twin leadership provided by EPS and OPS could have piloted the AIADMK after Jayalalithaa’s demise and Sasikala’s ouster, a single face was required to be projected as the leader of the party during the Assembly election. No wonder the announcement was seen as demonstration of unity among the top leadership and was greeted with sweets and crackers at the AIADMK HQ by a large crowd of enthusiastic cadres. The development would also put to rest any speculation that either EPS or OPS would strike a deal with Sasikala once she is released from prison in Feb 2021.

Today’s announcement also sent out a message to rival DMK and prospective allies of the AIADMK that the party would seriously attempt to retain power in spite of ten years of incumbency. Since the DMK has already projected M.K. Stalin as its CM face, which has been endorsed by other allies like the Congress and the left, the AIADMK too felt the pressure to rally behind a single face. “Our allies were looking for clarity on this issue since any ambiguity would have been exploited by the DMK during the election campaign. It would also help the AIADMK’s bargaining power during seat sharing since our allies can no longer cite the absence of a CM candidate as a chink,” pointed out a senior AIADMK MLA. “EPS will lead us to another stupendous victory like Amma did,” predicted an effusive Revenue Minister R.B. Udayakumar.

After decades of Karunanidhi versus Jayalalithaa, Tamil Nadu’s 2021 Assembly election will be a battle between Stalin and Palaniswami.