Members of the AIIMS Resident Doctors Association (RDA), who resumed work on Saturday, said that if the demands of the West Bengal doctors are not met within 48 hours, they would be forced to resort to an indefinite strike. 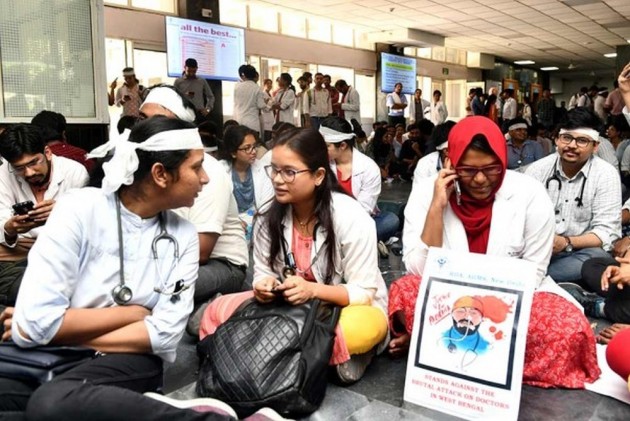 Resident doctors of AIIMS and Safdarjung Hospital, who boycotted work on Friday in protest against attacks on their colleagues in Kolkata, have now given a 48-hour ultimatum to West Bengal Chief Minister Mamata Banerjee to meet the demands of the state's agitating doctors, failing which they said they would go on indefinite strike.

Members of the AIIMS Resident Doctors Association (RDA), who resumed work on Saturday, said that if the demands of the West Bengal doctors are not met within 48 hours, they would be forced to resort to an indefinite strike.

"We condemn the hostile and unapologetic attitude of the government of West Bengal. Our protest at AIIMS, New Delhi continues until justice is meted out.

"According to the decision taken in a general body meeting held on June 14, RDA issues an ultimatum of 48 hours to the West Bengal government to meet the demands of the striking doctors there, failing which we would be forced to resort to an indefinite strike at AIIMS, New Delhi. We hope that our colleagues across the nation will join us in this hour of need," the AIIMS RDA said in a statement.

They expressed their gratitude to Union Health Minister Harsh Vardhan for his prompt and proactive steps to resolve the impasse.

"We sincerely hope that he will address this matter of utmost importance with the urgency that it merits," they said.

The doctors, however, will continue to wear helmets and bandages at work as a sign of protest.

The 48-hour ultimatum by AIIMS doctors comes days after Mamata Banerjee gave a four-hour ultimatum to the striking doctors in her state to withdraw their strike or vacate hostels.

To express solidarity with the doctors who are agitating against an attack on their colleagues in West Bengal, the Indian Medical Association (IMA) has called for a strike on June 17.

The IMA has also decided to continue their protest on Saturday and Sunday condemning the continued suffering of the resident doctors and repeated occurrence of harassments, it said.

These protests will include wearing black badges, dharnas, peace marches. IMA has also requested the support from all associations of the fraternity to join the agitation.

The apex body of doctors in the country also renewed its demand for a central law to check violence against healthcare workers in hospitals and said that the law should provide a minimum sentence of seven-year jail to violators.

Vardhan on Friday supported the medical fraternity's demand for a central law to check violence against healthcare workers in hospitals and said such crimes should be made non-bailable.

Scores of doctors in Delhi Friday held demonstrations, with many seeing patients in emergency wards wearing bandages on forehead or helmets, marching and raising slogans to express solidarity.