All passengers were evacuated safely after belly-landing of the plane, which was flying from Nagpur to Mumbai, according to the airport. 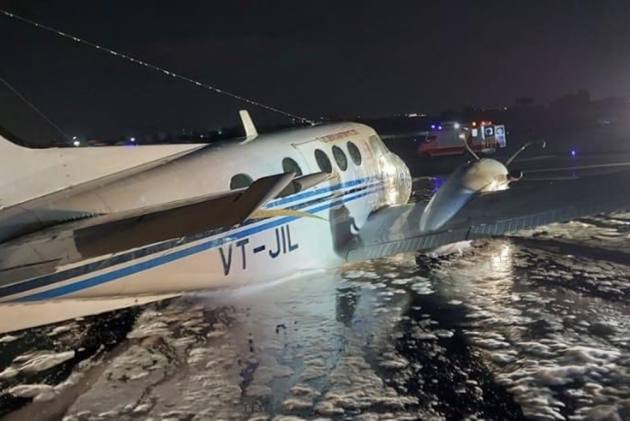 An air ambulance carrying five people, including a patient and a doctor, landed on its belly at Mumbai airport late Thursday evening after declaring a full emergency, with the airport authorities foaming the runway to avoid the plane catching fire.

A full emergency was declared for the non-scheduled Beechcraft flight.

All passengers were evacuated safely after belly-landing of the plane, which was flying from Nagpur to Mumbai, according to the airport.

While it could not be independently confirmed, reports said that a wheel of the aircraft came off soon after taking off from Nagpur. Pictures of the plane landing on the foamed runway were also doing the rounds on social media.

In a detailed statement, the Mumbai airport said the plane -- carrying two crew members, one patient, one relative and a doctor -- did a belly-landing at the airport at 2109 hours on Thursday.

"As a precautionary method, CSMIA also foamed RWY 27 in order to avoid the aircraft catching fire. All passengers were evacuated safely and flights operating in and out of CSMIA remain on schedule," the airport said in a statement.

According to an official, the aircraft belonged to Gurugram-based Jet Serve Aviation Pvt Ltd.

"The airport's emergency response team, including the fire and rescue responders, follow-me vehicles, CISF, medical team amongst many others, was activated instantly and on standby to provide immediate assistance to ensure the safe evacuation of the passengers," the statement said.

Full emergency is declared when an aircraft approaches an aerodrome in a manner that there is a danger of an accident occurring.

The Mumbai airport is known as Chhatrapati Shivaji Maharaj International Airport (CSIMA) and is the country's second busiest aerodrome.