As India marks Air Force Day on October 8, here's celebrating tales of valour in the face of 'invisible' enemies. 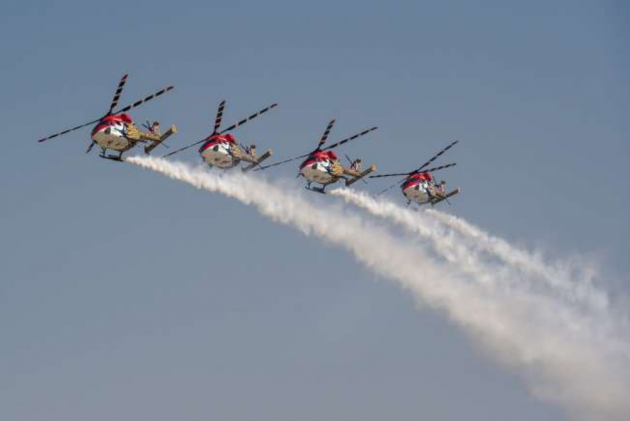 Fifty-six years ago, on 10 October 1965, a Radar shift crew headed by a young, still wet-behind-the-ears Pilot Officer (the first rank in the IAF Officer’s hierarchy then, now abolished), his Sergeant- on- watch and other assorted technical personnel were sipping peaceful, morning cups of tea in the cool air-conditioned environs of their ‘Igloo’ (Radar Ops Room), at a forward Indian Air Force base in Punjab, when all hell broke loose. Even as Sergeant Ganguli, excitedly yelled ”Sir, there is a raid approaching Pathankot ” everyone scrambled back to their radarscopes, adrenaline pumping.

The 1965 Indo-Pak War had ended just a fortnight ago and the Armed Forces were still on high alert with round-the-clock vigil mounted by Air Defence Radars on the Western Front. Any air activity near the border was considered Hostile unless proved otherwise.

And here was an air raid again, reportedly heading towards Pathankot!

Tales From A Forgotten War: Remembering A Childhood In Military Bases

The young Pilot Officer, with a couple of live war time radar ‘interceptions’ already under his belt, in which he had successfully vectored and guided IAF fighter aircraft onto intruding PAF aircraft resulting in their subsequent shooting down, was fired up by the scent of battle again.

He excitedly scoured the banks of radar screens in front of him, in the hope of picking up the Blip that would reveal the enemy aircraft’s position. But while the Primary (Surveillance) Radar screen obstinately refused to reveal an aircraft blip, the IFF (Identification Friend or Foe) Radarscope displayed a secondary IFF ‘track’, which is basically the electronic response from an aircraft identification transponder to an “interrogation’ signal sent out by a ground radar.

None of the neighbouring Surveillance radars at adjacent bases, had picked up anything either and yet, the IFF track continued moving Eastwards along the Himalayan range, North of Pathankot.

Sergeant Ganguli, had meanwhile got onto the radar scope that monitored height and was systematically scanning the area around the IFF track. He picked up a faint blip at a whopping altitude of more than 65000 feet, but there was still nothing to be seen on the main surveillance radar. Whoever it was, was flying high – well above the radar coverage area, or ‘Radar Envelope!’

As per laid down protocols and guidelines for unidentified aircraft intruding into Indian airspace, the Pathankot airbase scrambled air defence fighter aircraft to intercept the mysterious high flier, while other weapon systems were put on a 2- minute operational readiness, or ‘standby 2’ as it is called.

There was pandemonium in the Ops Room by now and the normally cool ‘Igloo’ suddenly felt as hot as the Sahara, as the CO and other senior officers milled around, trying to unravel the Mystery of the Missing Blip.

And all the while the aircraft stubbornly refused to show up on the radar screens and the inbound IFF track continued nonchalantly, heading towards Agra.

The young Pilot Officer and his Sergeant remained glued to their Hot Seats on the radar scopes while instructions flew thick and fast on how to catch the phantom aircraft. But all efforts notwithstanding, including the odd optimistic prayer to the Almighty, the blip refused to ‘paint’ on the ‘scopes.’

And the aircraft continued merrily, ‘on a wing and a Prayer’ of its own.

By now there was no doubt that the unidentified IFF ‘track’ was hostile, as it continued to follow a pattern of flying over Indian SAM 2 Missile Sites. It was also evident that the intruder was maintaining that huge altitude to stay clear of IAF Radar and any unfriendly weapons that might want to cause him harm and bring him down.

A (then) newly inducted MiG- 21 piloted by Wing Commander MSD Wollen was ‘scrambled’ from Chandigarh to deal with this challenge, with instructions to climb to a height of 21 Km (nearly 69000 feet- normal passenger jets fly at around 30000 feet usually) and await further Radar guidance.

But by the time he reached that altitude and requested to be vectored onto the enemy aircraft, even the IFF track had been lost, the intruder having presumably switched off his aircraft identification transponder with his mission nearly completed, whatever it may have been.

So there was ‘No Joy’ (no visual contact) on that score either. And to add to the frustration, the MiG – 21 Pilot was already reporting being ‘Very thirsty’ (very low on fuel), having used up most of the ‘juice’ in his tanks climbing to that astronomical altitude.

The debris of SAMs fired earlier had meanwhile been picked up on the ground triggering celebrations on the downing of yet another enemy aircraft, but these were short lived as the invisible intruder finally decided to make an appearance – he descended to 60000 ft and turned towards Ferozepur on the Indo -Pak border. As if to rub salt into the frustrated radar controller’s wounds, he was received by two Pakistan Air Force aircraft close to the border in a hero’s welcome and escorted to the American U-2 USAF base at Peshawar!

What was subsequently learnt through the grapevine, though never confirmed, was that the phantom aircraft was most probably a U-2 Spy Plane on a Reconnaissance Mission flown by the USAF – the US Air Force- possibly to obtain vital operational and photographic information on the Russian built SAM2 missiles deployed by India, with the intention of using the same for attacking similar sites in Vietnam later.

And this they did almost immediately thereafter - but that is another story!

The U-2 saga did not end there, as life continued for the protagonists in the Air Force. Sgt Ganguly retired and settled down at Kolkata, Wg Cdr Wollen who flew that abortive high altitude interception sortie, retired as an Air Marshal and the young, wet- behind- the ears- Pilot Officer who narrated this story to me, went to become the much-respected Air Marshal RC (Bill ) Mahadik – the Air Officer- In- Charge Administration of the IAF in later years.

And unbelievably, the invisible U-2, reappeared on his life’s radarscope again in 2018, albeit as a friend this time! This time instead of the aircraft coming in stealthily, the now-retired Air Marshal was invited as a guest, to USAF Beale – the U-2 Base of US Space Command, to attend the retirement ceremony of his Niece from the USAF. She had been a USAF Medical Officer who had served with distinction in war-torn Iraq and Afghanistan.

He was accorded VIP treatment with the entire base being thrown open for them to visit, including a visit to the Radar Ops Room which mounts surveillance of outer space. A couple of U-2 sorties were specially arranged for him to appreciate the way it is handled by pilots, particularly during take-off and landing. Information that might have easily come in handy for that young Pilot Officer of long ago, who had so valiantly tried to track down an elusive U-2 all those years ago – and had done his best to have it shot down over Indian airspace, without success.

It is said that Karmic philosophy ordains that you come back to your starting point in life after 84 lakh births, but there he was- destined to meet his tormentor, the ‘invisible’ U-2, after 53 years, in this lifetime itself.

Times had changed and the wheel had turned a full circle.

(Arijit Ghosh is a retired Wing Commander of the Indian Air Force. Views expressed in this article are personal and may not necessarily reflect the views of Outlook Magazine.)