A five-member delegation of AITMC has alleged that 'BJP goons' attacked party GS Abhishek Banerjee's vehicle with sticks and rods during his recent visit to a temple in Tripura. 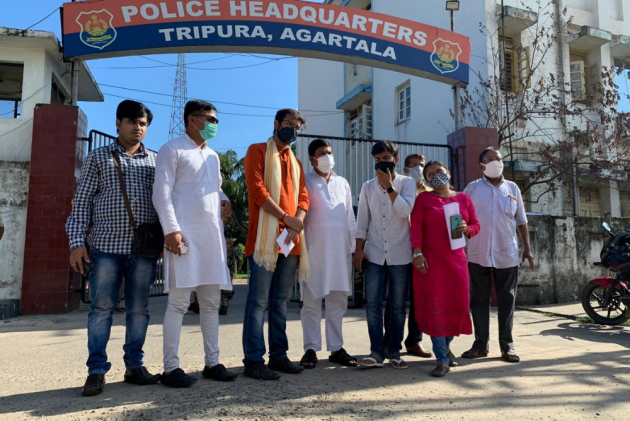 A five-member delegation of All India Trinamool Congress (AITMC) has filed a police complaint following an alleged assault by 'BJP goons' on the convoy of party general secretary Abhishek Banerjee during his recent visit to Tripura.

The delegation filed a complaint with the DGP of Tripura police alleging assault and hooliganism causing threat to Banerjee's life. According to the party, alleged BJP goons attacked his vehicle with sticks and rods during his visit to the Udaipur Matabari temple.

Upon returning from the police headquarters in Agartala after submitting the complaint through West Tripura district SP Manik Das, AITMC spokesperson Debangshu Bhattacharjee said, “On that day, BJP goons with party flags and rods attacked Abhishek Banerjee’s vehicle at 13 spots while he was going to Udaipur to worship Maa Tripureswari. All incidents took place in front of the state police who were mere spectators.”

Bhattacharjee, who was part of the five-member delegation, said that under normal circumstances, it took around 1 hour to cover the 60 km distance between Agartala and Matabari. But due to the obstructions created by the goons, it took nearly three hours for Abhishek’s convoy to reach. Moreover, some of his security personnel were also injured trying to protect him.

Bhattacharjee threatened that AITMC shall go for state-wide agitation if police failed to take appropriate action against the culprits.

“We have video evidence and have asked the police to identify the culprits and those under whose instruction everything was happening. We hope police will take action against the perpetrators or TMC shall lodge a state-wide agitation against it. We are not CPIM or Congress. If required, we will sacrifice our blood to get justice," he said,

The other members of the AITMC delegation were Sudip Raha, Jaya Datta, Prakash Chandra Das and Maman Khan.