In a statement, the state coordinator of NRC Prateek Hajela said the final list has left out '19,06,657 number of people'. He said, about 31 million people have been included in the final list. 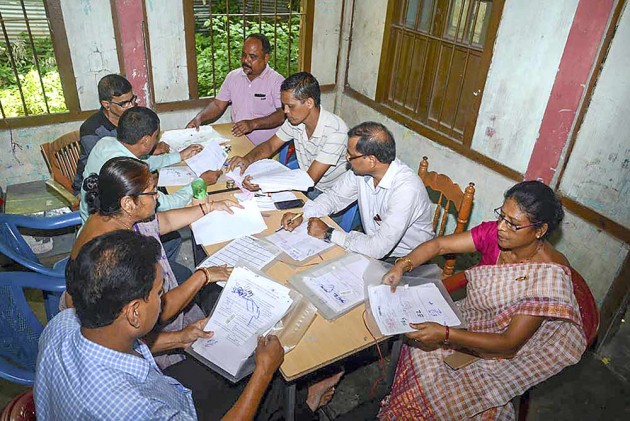 An AIUDF legislator and a retired army officer who won the president's medal after fighting the Kargil war are among 1.9 million people in Assam who were left out of the final National Register of Citizens (NRC) published on Saturday.

Sources said that Ananta Kumar Malo, the AIUDF MLA from South Abhayapuri, and his son’s name were not in the final list, barely a day after the state government dumped the “faulty exercise” and said there “is no reason to celebrate tomorrow”.

While speaking to the reporters, Malo said that he would abide by the rules and regulations of the system.

Amid Despair And Anger, NRC Proponents Are Most Disgruntled Now

Over 1.9 Million People Left Out Of Final NRC, State Govt 'No Longer Believes In National Document'

“I’m an India and so were my forefathers. There’s no doubt about that. I don’t know why my and my son and grandson’s names are not in the list. I will follow the rules of the system. I’m hopeful that it will be included,” said Malo.

Also out of the NRC is Mohammad Sanaullah, the retired army officer who fought in the Kargil war. While Sanaullah's wife features in the final list, his daughters and son have failed to make an entry into the list.

"My name and that of my son and daughters are not there in the list. It’s definitely painful but I have to be patient and wait for the order of the court. I have faith in the judicial system of our country,” Sanaullah told Outlook.

Sanaullah, a resident of Kalahikash village in Kamrup district of Assam, said he had joined the Army in 1987 and had also served in Doda and Kupwara in trouble-torn Jammu and Kashmir. But he was sent to the detention centre earlier this year after a Foreigners’ Tribunal had ordered that Sana Ullah had failed to establish his linkage to his parentage of Indian soil prior to March 25 of 1971.

Security forces fanned out to sensitive places in the tense state where the massive and controversial exercise since 2014 has opened old wounds and divided people on religious and linguistic lines.

Meanwhile, several organisations, including the All Assam Students’ Union, expressed dismay over the list, implying that the number of people excluded was much “lower than expected”. They also announced plans to move the Supreme Court, which is monitoring the NRC update, for an error-free list.

In a statement, the state coordinator of NRC Prateek Hajela said the final list has left out “19,06,657 number of people”. He said about 31 million people have been included in the final list.

Though a break-up of the numbers was not immediately available, earlier data had indicated that most of those excluded could be Hindus and not Muslims as expected. This is one of the major concerns for the BJP governments — both at the state and the Centre — as providing a safe haven for “persecuted Hindus” from neighbouring countries has been a major agenda of the ruling party. The Saturday list is the Supplementary List of Inclusions, and the full list of the NRC will be published on September 7.

Assam finance minister Himanta Biswa Sarma—a key man in the BJP’s expansion in the Northeast—said the party no longer believed in the NRC as a national document. “It is just the end of a phase for us… Dispur and Delhi have already started thinking of an alternative mechanism to expel the illegal foreigners,” he was quoted as saying in a media report.

Sanjib Goswami, an RSS commentator, said on Saturday that the BJP was not opposed to the NRC or the exercise "but only opposed to this faulty NRC". Most of the political parties are yet to make official statements on the NRC.

The excluded 1.9 million are from nearly 33.2 million people who had applied for inclusion in the citizenship records. The final NRC features the names of individuals who have been living in India before March 24, 1971, or those whose ancestors resided before the cut-off date.

The NRC update exercise is part of the 1985 Assam Accord that marked the end of a six-year-long mass movement demanding detection and deportation of what many believe to be “lakhs of illegal immigrants”, mainly from Bangladesh with whom Assam shares a 262-km border.

The controversy-ridden exercise has put the state in the global spotlight over an alleged Hindu right-wing conspiracy targeting the minority Muslim community. Several BJP leaders, including Union home minister Amit Shah, have termed the infiltrators as “termites” while vowing to protect the Hindus fleeing persecution in neighbouring countries.

Those left out of the NRC will no get 120 days to reclaim their citizenship. Their appeals will be heard by foreigners tribunals, a quasi-judicial set-up exclusive to Assam. The Centre has also said that those left out of the NRC will not be sent to ‘detention centres’, temporary jails for people whose citizenship are in doubt. Both the central and state governments have also promised legal help to “all genuine citizens” whose names are not in the NRC.

Rights activists point to the exclusion of retired army personnel and family members of freedom fighters among others to highlight what they claim was a faulty process to determine citizenship.

Regional TV channels showed heated debates in panel discussions with some anchors expressing "pride and satisfaction" over an incident-free NRC publication. The All Assam Students' Union (AASU), which had led the anti-foreigners agitation, offered prayers to the 885 "martyrs" who were killed during the movement. AASU leaders said the NRC was possible due to the sacrifices made by the martyrs.