"The Akhilesh Yadav government had promised to give laptops to youths. For this, 15 lakh laptops were purchased but only 6.25 lakh were distributed," he said 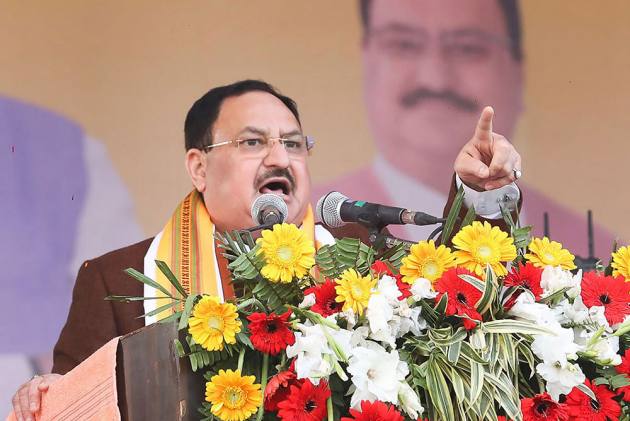 People who did not know the meaning of 'aachman' -- a Hindu ritual of purification by sprinkling pious water -- and how to drink 'charnamrit' -- water after the ablution of a deity's feet with it -- have now begun ringing bells in temples and boasting of sandalwood paste on their foreheads, he said. Levelling his allegation of embezzlement of welfare scheme funds during the tenure of the previous SP government, Nadda said, "The difference is now clear in Uttar Pradesh. The money of the (various) schemes now directly goes to the accounts of people. At the time of the Akhilesh Yadav government, money used to go for his (Akhilesh) consumption."

"The Akhilesh Yadav government had promised to give laptops to youths. For this, 15 lakh laptops were purchased but only 6.25 lakh were distributed," he said, and asked, "Where did the rest go?" The Adityanath government has given one lakh laptops and smartphones to youths. One crore youths will be given laptops and smartphones in the future, he said. Accusing the previous SP government of being sympathetic to terrorists and criminals, Nadda said, "Akhilesh ji had withdrawn cases to save 15 terrorists. But the court did not allow it. Four of them were given death sentences, and the rest life imprisonments."

"Do you need a government which protects terrorists," he asked. With the upcoming assembly elections to be held amid the lingering farmers' resentment over the now-repealed three central farm laws, Nadda also accused both the previous SP and the BSP governments of being indifferent to the plight of farmers, including those cultivating sugarcane.

The Adityanath government alone paid a sum of Rs 1.40 lakh crore to sugarcane farmers, while under Mayawati's rule, 21 sugar mills were sold at throwaway prices and 18 were shut down, he claimed. In the Akhilesh Yadav regime, 11 sugar mills were shut down, while the Yogi government started three new sugar mills and brought up the number of running sugar mills to 54, he added. Claiming the BJP to be a unifying force amid the opposition's alleged divisive agenda through the vote bank politics of appeasement, Nadda said his party talks of inclusive growth but the opposition evokes Mohammad Ali Jinnah's name to further their agenda.

"Those indulging in vote bank politics are in disarray today. It is because Prime Minister Narendra Modi has ended it and has kicked off the politics of development. Casteism, regionalism, dynastic rule and appeasement have collapsed now," Nadda said. Attacking the Congress, the BJP president said, "A lot of talk on women's empowerment is taking place these days. Some people say, 'Ladki hoon, lad sakti hoon', but why were you not ashamed when women were forced to defecate in the open? In our double-engine government, more than 11 crore toilets were built and women got the right to live with dignity. In Uttar Pradesh also, about 1.95 crore toilets were built," he said.

Nadda said if the button is pressed on the wrong symbol in elections, mafia rule comes, riots take place and respect of women is lost. But when the right button is pressed, medical colleges are built and good governance comes. The BJP leader said SP president Akhilesh Yadav's promise of providing 300 units of free power to domestic consumers is just a lie. The BJP's poll campaign tours were to reach out to the people in all 403 assembly constituencies of the state and win their trust ahead of the upcoming polls. After crisscrossing the state for around a fortnight, all six streams of the tour are culminating at various places of the state now. The BJP had set off its poll campaign tours in a replication of its Parivartan Yatra ahead of the 2017 Uttar Pradesh assembly polls in which it and its allies had won 325 seats.