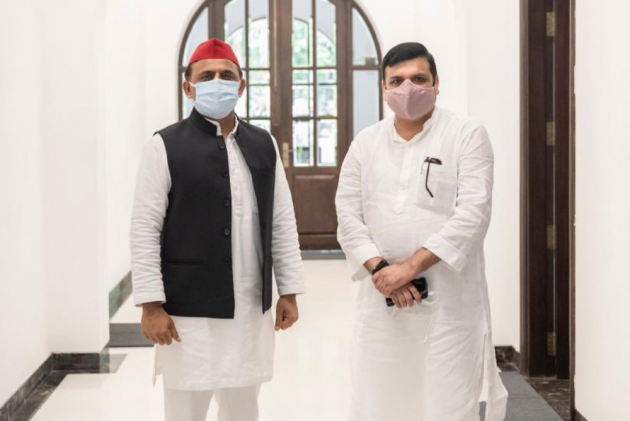 With the upcoming Assembly Elections in Uttar Pradesh slated for next year,  Samajwadi Party chief Akhilesh Yadav gave rise to speculation of an alliance with Aam Aadmi Party after he met senior AAP leader Sanjay Singh for a meeting in Lucknow on Saturday.

The meeting took place even as SP faced a drubbing in the Zila Parishad commissioner post elections held in Uttar Pradesh on Saturday, with Bharatiya Janta Party-backed candidates winning 67 out of 75 seats.

The AAP leader refused to comment further on the meeting, saying he met Yadav to convey birthday greetings to him and held a discussion over the current political situation in the state.

The meeting was, however, confirmed by Singh in a tweet on the microblogging site Twitter, thanking Yadav for meeting him despite elections.

In the tweet, written in Hindi, Singh also said that during the meeting, the duo discussed BJP sweeping the local body polls and the issue of the ruling party turning "loktantra" (democracy) into "loottantra".

Yadav also shared a photo of the meeting.

Answering a question as to whether SP and AAP will enter an alliance in the upcoming Assembly elections, Singh said that he cannot comment on the matter.

The meeting comes after Yadav on Saturday accused the BJP of "kidnapping" voters and making light of the democratic process by winning the local body polls using 'force'.

Following its failed collaboration with Mayawati's Samajwadi Party, SP had earlier said that it will be looking at smaller parties for alliance ahead of UP polls. AAP is also looking to expand its footprint in other states and is set to contest the state elections in six states UP, Uttarakhand and Punjab next year.