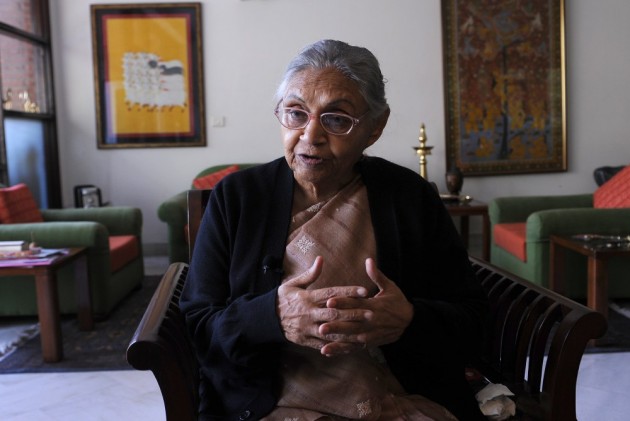 Extremely sad to know about the passing away of #SheilaDixit ji...she effectively changed the face of Delhi during her tenure. Heartfelt condolences to her family ðÂÂÂÂÂÂÂÂÂðÂÂÂÂÂÂ»

Actor-turned-politician Urmila Matondkar, who contested her debut election from Mumbai North constituency under the banner of Congress, remembered the late leader for her "fierce and yet kind personality".

Sincerest condolences & prayers for one of the most popular, loved, admired & respected leaders of the country, #SheliaDixit. She was an extremely successful CM of Delhi, a great administrator & a fine human being. May her family, friends & supporters find the strength

Veteran singer Lata Mangeshkar too expressed condolences by tweeting about her personal bond with the late political leader.

Was deeply saddened to hear about Sheila ji’s demise.
A remarkable woman, former CM of New Delhi and a keen admirer of all art forms. We never discussed politics but had long talks on music and poetry. May her soul rest in peace and heartfelt condolences to her family.

One of the tallest leaders of the @INCIndia, a graceful politician whose contribution to Delhi has been irrefutable. RIP #SheilaDikshit ji. Heartfelt condolences to #SandeepDikshit and the bereaved family. Om Shanti ðÂÂÂÂÂÂÂÂÂ

Referring to the late politician as "a great administrator and a fine human being", Congress leader Shatrughan Singha wrote:

Sincerest condolences & prayers for one of the most popular, loved, admired & respected leaders of the country, #SheliaDixit. She was an extremely successful CM of Delhi, a great administrator & a fine human being. May her family, friends & supporters find the strength

Senior Congress leader Sheila Dikshit passed away on Saturday at Delhi's Fortis Escorts Heart Institute in the city due to cardiac arrest.

She was the senior-most Congress leader in its Delhi unit and served as national capital's chief minister for three consecutive terms. She was said to be a very close aide to UPA chairperson Sonia Gandhi.

The 81-year-old was appointed the president of Delhi Pradesh Congress Committee earlier this year in the run-up to the Lok Sabha elections.