Alagiri Using BJP Bait To Strike A Deal With DMK

Alagiri has been dangling threats of floating his own party in an attempt to strike a deal with Stalin ahead of state assembly polls due next year. 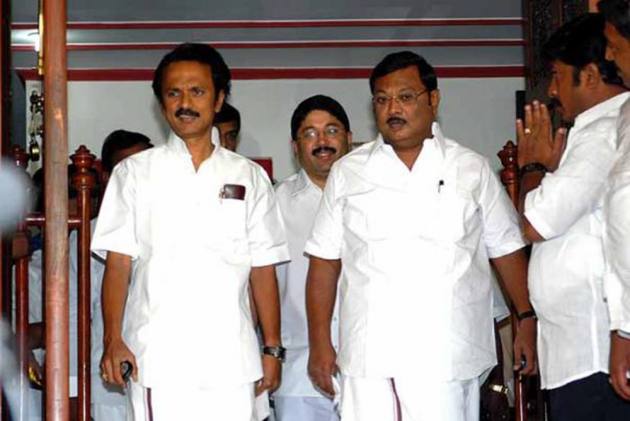 M.K. Alagiri, the estranged elder brother of DMK chief M.K. Stalin, may actually be using the BJP as a bait to get back into the DMK or at least get a favourable deal for his son in one of the trusts controlled by Karunanidhi’s family.

On Tuesday, Alagiri refuted news reports that he was slated to meet Union home minister Amit Shah in Chennai on November 21 to seal an alliance with the BJP ahead of the May 2021 assembly elections. “I am consulting my supporters about forming a party. But there is no truth that I am meeting Amit Shah. No one from BJP has contacted me,” he said.

In the same breath Alagiri (69) also added that he was ready to accept the leadership of Stalin (67) though he did not elaborate. Alagiri, who was expelled from the DMK by his late father M. Karunanidhi in 2014, has remained politically inactive all these days except for the occasional barb he would fling at Stalin who has consolidated his hold on the DMK since his father’s demise in August 2018.

Since the 2021 Assembly elections constitute a do-or-die battle for the DMK, which has been out of power in the state for nearly a decade, Alagiri hopes that he could strike a deal by issuing covert threats of launching his own party and joining hands with the BJP. Stalin and other senior leaders have been cold to his previous overtures about his return to the DMK in spite of his willingness to accept Stalin’s leadership.

“By keeping him out of the party and in political cold storage Stalin has effectively defanged Alagiri as most of his supporters have now rallied behind Stalin. He has very few followers and little clout even in the southern districts,” a senior DMK functionary said. Alagiri’s listless performance as an MP and a Union minister in UPA 2 further dented his image. Also, he had called the shots within the DMK only when the party was in power. He would withdraw into a shell whenever the DMK was in opposition unlike Stalin who has remained politically active throughout.

Alagiri’s latest posturing is aimed at accommodating his son Durai Dayanidhi in the Mursaoli Trust, that publishes the DMK’s official organ “Murasoli” and controls many properties across the state that ensure a steady income. He has been urging for this deal through his sister Selvi and step-sister Kanimozhi but Stalin has not obliged him.

Playing the BJP card and dangling the threat of floating his party are being viewed as arm-twisting techniques ahead of the Assembly elections to strike a deal with his younger brother. Even his supporters doubt if Alagiri can launch and sustain a political party even for a few months ahead of the Assembly elections. According to DMK sources the party’s general secretary Durai Murugan had a long phone conversation with Alagiri on Monday night to dissuade him from making any drastic move that could hurt the DMK.