The FIR says the provisions of Section 144 had been in effect since November 8, 2019. 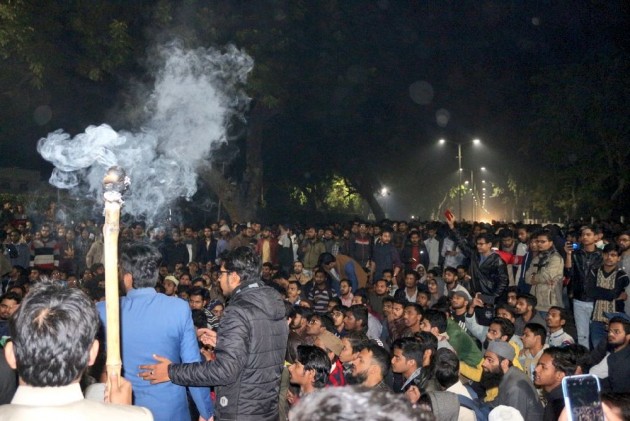 The students carried out a torch march to protest against the CAB and NRC, moving towards the Bab-E-Sayyed gate, varsity's designated spot for protests and public meetings.

According to FIR, a copy of which is with Outlook, the three police officers, who were on duty, alleged the students shouted slogans against the CAB and wanted to take forward the march to the city circle.

They alleged the students "pushed them, continued raising slogans against the administration and reached the AMU circle."

"And with that, they (students) violated Section 144 of IPC and interrupted government officers on duty," the FIR said.

However, students rejected these allegations, saying they never stepped out of the university, adding they protested at the designated spot.

Akash Kulahari, SSP Aligarh, told Outlook that "Section 144 was in effect in entire Aligarh district" but denied any FIR had been lodged against any student.

Sheraz Irteza, a University student, said it was police's "standard response: to file an FIR and use it as a tactic to intimidate us."

Referring to the Preamble to the Indian Constitution, Irteza said: "It clearly says the state will remain secular, and if the state -- led by a political party -- starts promulgating laws against secularism, it needs to be opposed and fought."

"It's sad that the home minister of the country stands in the Parliament and speaks about accepting people from six communities and deliberately sidelines one."

Irteza said whenever the students protest, "they -- administration as well as the police -- say Section 144 is in place, and therefore we can't."

Another varsity student, Mutayyib, said everyone on campus makes a family. "Do we need permission to even speak and assemble here? Does a family ask the administration before speaking among itself?" Mutayyib asked.

Sharjeel Usmani, a BA final year student, told Outlook that the present dispensation has "made a joke out of us, Muslims."

"Our protest is not just against the CAB, it's also about reclaiming dignity and self-respect for Muslims," he told Outlook.

"We can't be reduced to second class citizens just like that," he said, adding "the scope of protest is going to get widen from here onwards."

On Wednesday, AMU students began a symbolic hunger strike which will be observed across dining halls on campus. A student, who didn't want to be named, claimed even though only college students were requested to observe the strike, but when kids in the secondary school came across the news of symbolic protest, they, too, decided to join.

University PRO Omar Peerzada confirmed that local media had reported the FIR had been registered against students but added he was currently not in a position to comment on the way forward. "We are trying to gather information about the protest and FIRs," he told Outlook, adding, "we will take the next step once everything is clear to us."

The controversial Citizenship Bill has sparked protests and agitations across the country, with many calling it "unconstitutional" and against the secular idea of India.

The Bill seeks to grant citizenship to illegal non-Muslim migrants from Pakistan, Afghanistan and Bangladesh if they faced religious persecution there. It is presently being debated in the Rajya Sabha before MPs vote on the Bill.