All Dressed Up And Nowhere To Go For Shiv Sena As Congress, NCP Pass The Buck On Govt Formation

The fast-moving developments in Maharashtra have cast a shadow on the ambitious plan of the Sena to form the government with support of the Congress-NCP. 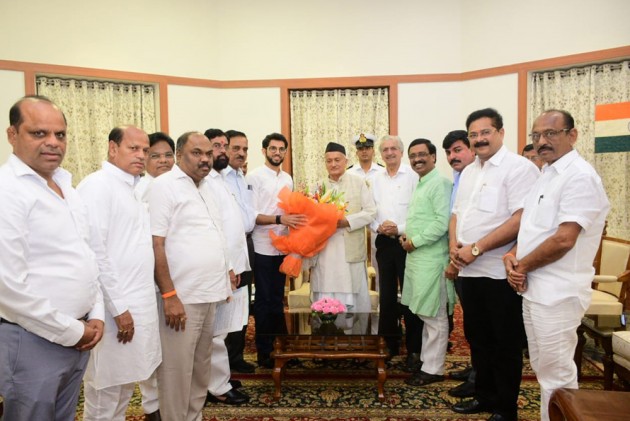 It’s a classic case of ‘all dressed up and nowhere to go’ for the Shiv Sena in Maharashtra. Waiting in the wings to get the chief minister’s chair after severing its 30-year-old ties with the BJP, the party appears to be looking on helplessly as the Congress and the NCP continue to pass the buck to each other on the delay in the formation of a non-BJP government in the state.

A Sena delegation led by its young turk Aaditya Thackeray had called on Governor Bhagat Singh Koshyari on Monday in Mumbai seeking two more days to stake claim to form the government. But Raj Bhawan had turned down its request and decided to invite NCP later to know if it was in a position to form the government. The NCP now has to apprise the Governor of its decision by 8:30 p.m. on Tuesday.

The fast-moving developments have cast a shadow on the ambitious plan of the Sena to form the government with support of the Congress-NCP. Uddhav Thackeray’s party has 56 MLAs in the new assembly while the NCP and the Congress have 54 and 44 seats respectively. Together, the three parties have 154 legislators, ten more than what is required to get a simple majority in the 288-member in the House. But both the Congress and NCP put paid to Sena's hopes, fighting shy of sending their support letters to Raj Bhawan which left the Sena fend for itself.

On Tuesday, Senior NCP leader Ajit Pawar said that all the top party leaders kept waiting for the letter of support from the Congress all day long on Monday, but it never arrived. “We could not have given our support letter on own because we have contested the assembly polls together as allies,” Ajit told reporters in Mumbai.

The state Congress leaders, however, claimed that NCP supremo Sharad Pawar had a talk with Congress president Sonia Gandhi on Monday evening during which he said that the Shiv Sena had not offered any proposal so far on the nitty-gritty of government formation. It raised a big question mark over the Sena’s bid to form the government, triggering speculations that the state would ultimately be put under President’s rule soon.

Even as the suspense deepens, the Congress is still holding its cards close to its chest. The party is apparently wary of joining hands with the Sena, a party known for its aggressive Hindutva agenda, because of its fear of losing its minority vote banks in the rest of the country. Sonia is already reported to have held telephonic talks with Pawar again on Tuesday and A delegation of senior party leaders including its Maharashtra in-charge Mallikarjun Kharge is expected to reach Mumbai in the afternoon to apparently hold the final talks with Pawar on government formation. But there seems to be no end in sight as yet to the prolonged political uncertainty in the state.

Also Read | To Support Shiv Sena Or Not, A Hamletian Dilemma For Congress-NCP In Maharashtra