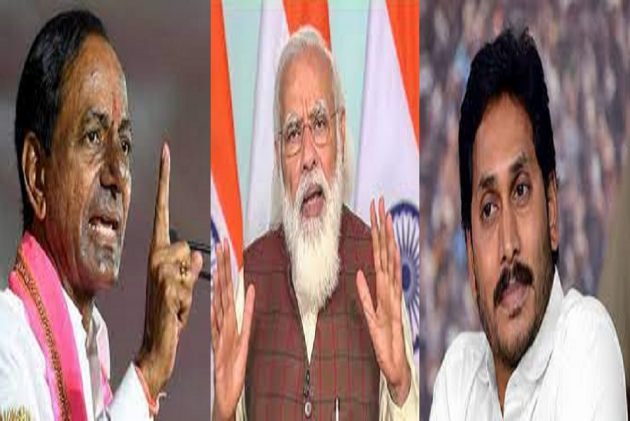 The so-far cordial relationship between the chief ministers of two Telugu states -Telangana and Andhra Pradesh - seems to have got washed away over the Krishna and Godavari waters dispute.

Telangana Chief Minister K Chandrasekhara Rao’s decision to go ahead with enhancing power production at Srisailam Hydel project triggered his counterpart and once comrade-in-arms Y S Jaganmohan Reddy to dash off a letter to Prime Minister Narendra Modi urging his intervention to prevent drawing excess water from the river Krishna without release orders from the Krishna River Management Board (KRMB). In his letter, he had also sought an immediate notification of jurisdiction of the KRMB and requested for taking over of all the common reservoirs with CISF protection and safeguarding his state’s interests.

The water sharing agreement was signed between the two states in June 2015, both of them agreed to share 811 tmcft of water allocated to the erstwhile Andhra Pradesh by the Krishna Water Disputes Tribunal (KWDT) at a ratio of 66:34.

Taken aback by the Jaganmohan's missive to the PM, KCR’s close confidants – G Jagadeeshwar Reddy and Srivas Goud reacted sharply saying that ‘he (Jaganmohan Reddy) needs to do some soul searching to understand what led to the present situation’. They blamed him for creating this situation, while their chief minister K Chandrasekhara Rao was more open and liberal in extending a hand of friendship and offered to settle all water disputes amicably. But they say Jaganmohan unilaterally took the decision to construct Rayalaseema Lift Irrigation Scheme (RLIS) as well as expand Pothireddypadu project to divert river Krishna water illegally to his state. “In the past former chief minister Y S Rajasekhara Reddy might have dared to divert Krishna water as there was no one to question. But today Telangana is a strong state,” they said.

At the time of state bifurcation in 2014, the water resources authorities said these projects may be kept under the control of the KRMB to oversee their maintenance as well as resolve any issues that crop up. The mechanism was worked out by forming a committee that comprises the engineers-in chief of both the states and member secretary of the KRMB. Jaganmohan Reddy in his letter stated that the Srisailam reservoir was originally contemplated as a hydroelectric project but now it was a multi-purpose project to meet the domestic industrial and irrigation needs. “Hence, we object Telangana government for going ahead unilaterally at its power house on the left side without placing any indent before KRMB, although there was no irrigation water requirement downstream,” the AP Chief Minister alleged in his letter to PM. He also wanted the central CISF personnel to guard these projects as the local police may be partisan.

Now all eyes are on the Centre. How is it going to respond to Jaganmohan's letter, as KCR seems to be in a combative mood and a resolution seems difficult.