The protesters and activists began gathering at the colony asking why the authorities couldn't wait till a petition was filed in the Supreme Court. 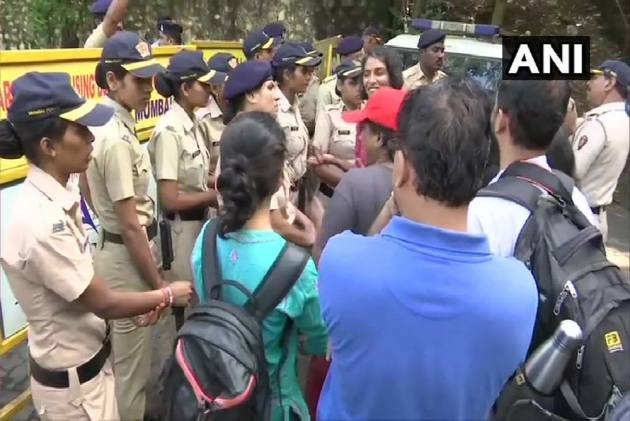 The authorities on late Friday night entered the Aarey Colony in Mumbai and began cutting trees for a metro car shed just hours after the Bombay High Court dismissed all the petitions challenging the felling of trees in the area often referred to as the green lungs of Mumbai.

The protesters and activists began gathering at the colony asking why the authorities couldn't wait till a petition was filed in the Supreme Court. On Saturday morning, at least 29 protesters had been arrested after the Mumbai police imposed Section 144 of the CrPC.

What did the petitions seek?

One of the pleas filed by the city-based NGO Vanshakti sought that the Aarey colony be declared a forest and ecologically sensitive zone, while another petition by green
activist Zoru Bathena pleaded the area be given the status of a floodplain.

What did the Court say?

While dismissing the petition filed by Vanshakti, the court in its judgment noted that the issue was already decided by an earlier bench of the high court and the matter is presently pending before the Supreme Court.

"The greens (environmentalists) fail in the instant petition because they have lost touch with the procedure to be followed as per law. The clock cannot be put back. We do not
make any comments thereon as the petitioner has to now swim or sink before the Supreme Court," the court said.

While dismissing the petitions filed by Bathena and Jadhav against the approval granted by the civic body's tree authority, the bench said the greens have failed on merit.

"The tree authority's decision-making process was fair, transparent and based on reason. The greens fail not on account of sailing their boats in the wrong channel but on merits," the court said.

The bench imposed a cost of Rs 50,000 on Jadhav, who is a member of the tree authority, terming his petition as "sheer voyagerism".

"It (Jadhav's plea) is sans any material and bereft of concise statements and details concerning the meeting of the tree authority held on August 29, 2019," the court said.

The court noted that there was no variation in the opinion of the members of the tree authority on the issue of whether the trees could be transplanted or had to be cut.

"There are good reasons for taking the view that the trees would not survive if transplanted and that it would be futile to spend good money to transplant the trees which ultimately would by and large die," the bench said.

The court also took note of the submission made by MMRCL counsel Ashutosh Kumbhakoni that the authority has already planted 20,900 trees in the Sanjay Gandhi National
Park.

"This establishes that about seven times the number of trees to be felled have been replaced by planting of saplings," the court said.

The court termed all the petitioners as "Davids" taking on the industrial "Goliaths".

What do political parties say?

The Nationalist Congress Party (NCP) and Congress have been up in arms against the ruling Shiv Sena and BJP alliance, despite Aaditya Thackeray's strong criticism of cutting of trees. Another Sena leader Priyanka Chaturvedi was on Saturday detained from the site where she protesting against the felling of trees.

"The Aarey tree felling is nothing but hitting Mumbaikars by first rendering them helpless. The @ShivSena bedeviled for the last 25 years. Now, it is holding common Mumbaikars to ransom in alliance with BJP," NCP chief spokesperson Nawab Malik tweeted.

"This is the time @ShivSena. You are in the government, can stop this. The Mahayuti (mega alliance) is more important or the mega loss of trees?" Maharashtra Congress spokesperson Sachin Sawant tweeted.