Amartya Sen denies Visva Bharati VC’s claim that he had urged him not to evict hawkers near his ancestral home. 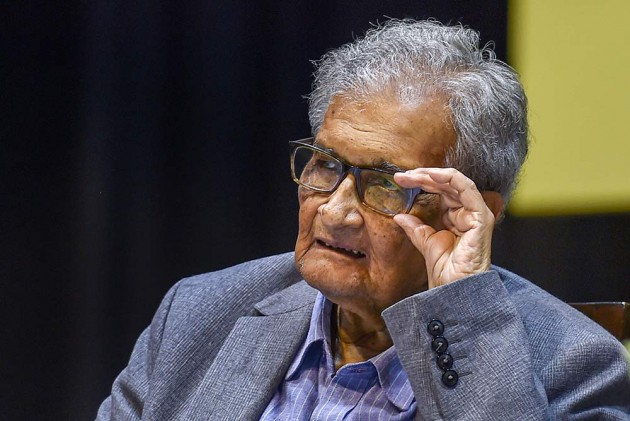 Did Visva Bharati (VB) Vice-Chancellor Bidyut Chakrabarty try to influence faculty members using an imaginary conversation with Amartya Sen? This question is doing the rounds after the surfacing of a letter in which Sen, an economics Nobel laureate and VB alma mater, denied having any conversation with Chakraborty on that subject.

The VC has been going through a running tussle with a section of the faculty, non-teaching staff and students ever since 2018 after he took charge of the institution founded by Rabindranath Tagore, Asia’s first literature Nobel laureate, in 1921. The recent issue over naming Amartya Sen during an online meeting with members of the faculty and some non-teaching officials took place on December 9.

“The VC was trying to exhort faculty members to join him in forcibly evicting shops, mostly selling handicrafts, which the VC thought was on the university’s land, a claim that has been contested by the shop owners. The majority of the faculty members have so far been reluctant to join the VC in his potentially controversial move of taking steps without involving the state administration, police or the judiciary,” said a member of the faculty who did not want to be named. The VB authorities had last year issued an order prohibiting all staff from speaking to the media without explicit written permission from the authorities.

During this online meeting, Chakraborty reportedly claimed that Sen had allegedly phoned him to request him not to evict vegetable vendors near his ancestral home, but the VC did not budge and in turn proposed that Sen donated his residence to accommodate the hawkers, a proposal to which Sen disagreed.

Sen has his ancestral house in Santiniketan, the small town founded by Rabindranath’s father, Debendranath Tagore, that later became known as home to Visva Bharati. At present, the 87-year-old is a Thomas W. Lamont University Professor, and Professor of Economics and Philosophy, at Harvard University in the United States.

Following the meeting, Visva Bharati University Faculty Association (VBUFA)’s president and secretary wrote a letter to other members of the association in which they detailed what the VC had said. That letter, dated December 13 which Outlook has accessed, was also forwarded to the prime minister, the President, and ministry of human resource development and the Bengal governor.

The prime minister is the chancellor of Visva-Bharati.

The letter reads, “We came to know that Professor Amartya Sen rang him up with the introduction: 'This is Bharat-Ratna Amartya Sen'. We all know that Amartya Sen is an extremely modest person, who needs no introduction. Why the Nobel Laureate in Economic Science, Drummond Professor of Oxford, Master of Trinity College, Cambridge, Lamont Professor of Economics and Philosophy at Harvard University had any need to introduce 'Bharat Ratna' to our VC? We came to know from VC that Professor Sen is an extremely selfish person, who wanted that the street hawkers near his house should not be evicted as her daughter used to buy things from them. At the same time, Professor Amartya Sen refused to donate his house for the hawking activities on the request of the VC.”

On December 14, the VBUFA also wrote to Sen seeking his version of what had happened. Sen’s reply came within a few hours.

“I am very surprised to hear about what the Vice-Chancellor of Visva-Bharati apparently has declared in an online faculty meeting. I do not think I have had such a conversation with him. I should also mention that I have never referred to myself as “Bharat-Ratna,” Sen wrote. “I also don’t think I could have referred to my daughter buying vegetables from the hawkers and that being a reason for keeping the hawkers undisturbed. I don’t know where my daughters buys vegetables! That would be no reason anyway to bring in the question of how the hawkers should be treated. Finally, there are no hawkers outside my home in Santiniketan.”

Sen also felt that the VB “often interferes too much with the normal life of ordinary people of which setting up walls to interfere with ways and passages of people” was a good example.

“I remember once writing about that some years ago in a newspaper. I also remember my mother, who of course lived in our home (Pratichi), did try to help hawkers from eviction, not outside our home (since there are no hawkers there), but near Pearson Palli. All this is, of course, quite unrelated to the absurd statement that the Vice-Chancellor has allegedly made,” Sen’s letter said.

Chakraborty, however,  reiterated on Wednesday that he did indeed have the purported conversation with Sen.

In a written statement, VB assistant registrar and public relations officer Anirban Sircar said that Chakraborty was returning from New Delhi in June 2019 by an Air India flight (AJ0020) that took off from Delhi at 2 pm and reached Kolkata al 4-30 pm. Upon boarding the university car from the airport, he received a call, with the caller informing him that Sen, who was introduced as a Bharat Ratna, wanted to speak to him over the phone.

“The Vice-Chancellor received the call. Professor Sen started criticizing and questioning the vice chancellor for demolishing the illegal shops that had mushroomed along the road on which Pratichi, Prof Sen's ancestral home, is located. In order to defend his point, he insisted that these shops had been there since the days of Tagore and that they were part of Visva Bharati. He illustrated the supposed convenience of having these shops around by giving the example of how he could easily buy food-stuff Iike Tarkari (vegetables) or get his daughter’s punctured flat tyre fixed,” Sircar’s statement reads.

It added, “The Vice-Chancellor was subjected to this kind of criticism because the administration had, under him, recovered the university’s rightful land by removing these illegal businesses.”

The university’s statement said that the VC brought up this conversation during the meeting to reflect the university’s endeavours to “combat encroachment by land sharks”, which the university considered “a serious problem” often brushed under the carpet “in fear of upsetting certain powerful people and their selfish interest.”

The statement also clarified that it was not meant to “indict Prof Sen in particular” but the VC wanted to “air his disgust at the sheer hypocrisy displayed by VBUFA colleagues (the so-called leftists) who, despite being asked for their inputs repeatedly in the meeting, did not speak up then, but were quick to later leak the exclusive information discussed in the closed-door faculty meeting to score brownie points.”

The varsity authorities also shared a three-page document, in which under the heading “major action required” they listed 15-20 illegal stalls at Dakshin Palli, 40-50 structures at Bhubandangha Bandh area and unauthorised occupation on leased land at Purvapalli, Shreepalli and Dakshin Palli areas by “very high profile people.” “Even Prof A Sen is also occupying 13 decimals of VB land unauthorisedly,” the document reads.

On Wednesday’s statement, the VB authorities claimed that the call to Chakrabarty came from a person named Aurobindo and gave away his phone number. Upon calling the person, Outlook found that the number belonged Aurabinda Nandy, an associate of Sen. He said, “Sen uses my phone to make local calls when he is here (Santiniketan). I remember he once spoke to Chakraborty from this number, even though I don’t know what they spoke about. Neither do I remember when this conversation took place. However, I can tell it for sure that neither did I introduce Sen as a Bharat Ratna nor does Sen ever introduce himself like that.”

Sen won the Nobel in economics in 1998 and was awarded Bharat Ratna, India’s highest civilian award, the next year.