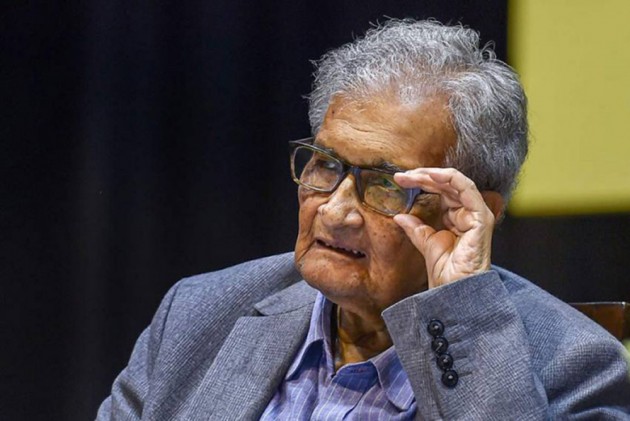 Weeks after a huge controversy erupted after officials at the Visva-Bharati University accused Nobel laureate Amartya Sen's family of being in "illegal" possession of land at the campus, university officials have now written to the West Bengal government to measure the plot to resolve the dispute.

Earlier, the Nobel laureate had said that the university land on which his house stands is on a long-term lease.

West Bengal chief minister Mamata Banerjee had reacted angrily to the accusation, saying Sen was being subjected to "such a vicious attack by the present university authorities because of his ideological anti-BJP stance". Several prominent intellectuals of the state have also expressed support to the economist on the row.

Meanwhile, university officials have defended their move. Vice-Chancellor Prof Bidyut Chakraborty is being subjected to criticism for going on a drive to recover illegally occupied land which rightfully belongs to the institute, Visva-Bharati Officiating Registrar Ashok Mahato said in a statement.

The statement read, "We demand the surveyor of the Land and Land reforms department of government of West Bengal measure the plot" and this should be done as soon as possible to permanently resolve the dispute.

A controversy had erupted on December 24 last year, the day Prime Minister Narendra Modi addressed the centenary celebrations of Visva-Bharati, when a few sections of the media reported that the university has written to the West Bengal government alleging dozens of land parcels owned by it were wrongfully recorded in the names of private parties including Sen.

In the statement issued on Saturday, the officiating registrar said that a portion of the 1,130 acre of land belonging to the varsity has been occupied illegally.

The university again claimed that the VC got a phone call from a number in June or July 2019, and the caller handed over the phone to Sen who criticised the demolition of illegal shops near 'Pratichi', his ancestral residence.

Sen, who now lives in the USA, had already trashed both claims by the Visva-Bharati maintaining that he did not visit India during June-July 2019, had no hawkers near his residence and the land, on which his house stands is on a long-term lease, which is nowhere near its expiry.

Stating that the Visva-Bharati authorities had never complained to him or his family about any irregularity in holding the land, Sen has accused the VC of acting at the behest of the Centre "with its growing control over Bengal".

On the VC first broaching the subject concerning Sen's purported phone call in 2019 at a meeting with the faculty, the statement said that Chakraborty's statement was not meant to indict Sen, who, in view of his significant contribution to academia, "is worthy of the highest respect".

The VC rather wanted "to air his disgust at the sheer hypocrisy displayed by VBUFA (Visva-Bharati University Faculty Association) colleagues who, despite being asked for their inputs repeatedly in the meeting, did not speak up then, but were quick to leak the exclusive information later ostensibly to score brownie points."

After the meeting, VBUFA President Sudipta Bhattacharya apparently wrote a mail to Sen to verify whether the Nobel laureate had telephoned the VC to oppose hawker eviction outside his residence in Santiniketan. Sen's faculty assistant then replied on his behalf asserting that the economist had not made any such request.

"The vice-chancellor made statements regarding his telephonic conversation with Prof Sen and also about the land encroachment in his virtual meeting with his colleagues on December 9. It was a closed-door meeting, only those belonging to Visva Bharati had access," the statement said.

The university issued a show cause notice to Bhattacharya last month for allegedly violating code of conduct by approaching the media with "internal correspondence".

Bhattacharya was put on suspension on January 7 on another charge of circulating allegations on social media against a colleague.

Bhattacharya recently alleged irregularities in the appointment of a colleague and even wrote to President Ram Nath Kovind and Prime Minister Narendra Modi, the Visitor and Chancellor of the central university respectively, about it.