A video from Chennai shows several vehicles stuck in a traffic jam and at the tip of the jam, stands an ambulance. Several two wheelers, possibly violating social distancing guidelines, are also seen in the video. 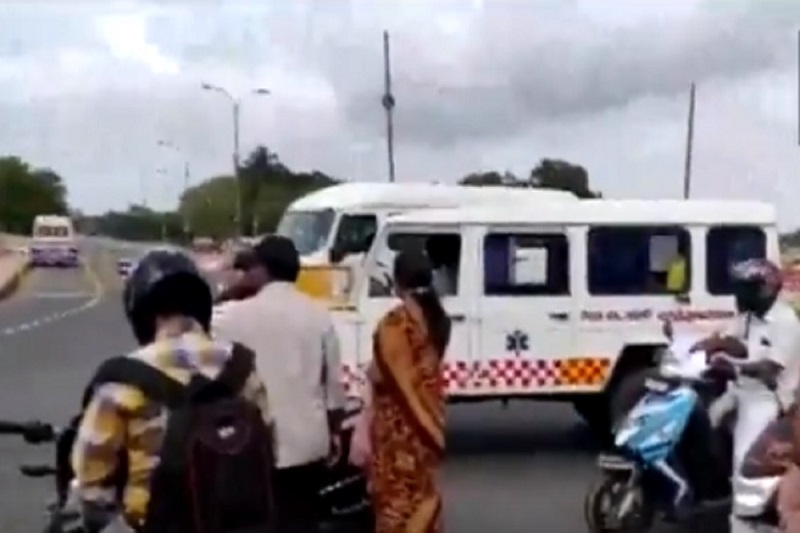 A video of a traffic jam in Chennai, where an ambulance is also stuck, has been doing the rounds on social media. The traffic jam was caused as the Police stopped commuters to allow a VIP Convoy to pass, and as per some allegations, the convoy belonged to Tamil Nadu Chief Minister E. Palaniswami. Chennai Police, however, denied the allegations.

The video shows several vehicles stuck in a traffic jam and at the tip of the jam, stands an ambulance. Several two-wheelers, possibly violating social distancing guidelines, are also seen in the video.

#WATCH An ambulance and commuters were stopped by Chennai Police near Island Grounds intersection to allow VIP convoy to pass, today. #Chennai pic.twitter.com/0gdvHOhrFX

After the video drew criticism from senior opposition members, inluding DMK leader Kanimozhi, Police clarified that the VIP convoy did not belong to the CM and the vehicles had been stopped for check because of lockdown violations. There were no patients in the ambulance either, the police said.

"Congratulations CM! A few days ago, you brought entire cities out on to the road because of your lockdown within a lockdown. Now, you bring the city traffic and ambulances to a standstill. Your humility is amazing," Kanimozi said in a tweet.

The DMK leaders' comment was a refernce to Palaniswami's decision to tighten the coronavirus lockdown in 5 Cities including Chennai, Coimbatore, Tiruppur, Salem and Madurai.

The decision was taken after Palaniswami chaired a review meeting on the coronavirus spread in the state.

In a statement, Palaniswami said in Chennai, Coimbatore and Madurai the lockdown will be implemented strictly between 6 a.m. and 9 p.m. from April 26-29.

'This Institution Is Not Hostage Of Government,' Says Supreme Court