The prime minister said India-US relations are no longer just another partnership. 'It is a far greater and closer relationship now. One is the 'land of the free' the other believes the world is one family,' he said. 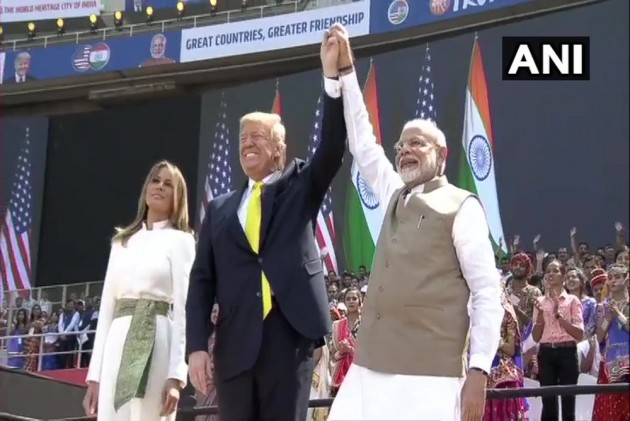 United States President Donald Trump on Monday said that India's rise as a prosperous and independent nation was an example for every nation across the world, for it had achieved it all as a peaceful, democratic, tolerant country.

"We will always remember this remarkable hospitality. India will hold a special place in our hearts. PM Modi started out as 'tea wallah', he worked as a tea seller. Everybody loves him but I will tell you this, he is very tough," Trump said.

"All over the planet people take great joy in watching Bollywood films, bhangra, and classic films like DDLJ and Sholay. You cheer on great cricketers like Sachin Tendulkar and Virat Kohli," the US President said.

The two leaders hugged each other twice before the PM took to the dais. "I think today we can see history being repeated. Five months ago, I started my US trip with 'Howdy Modi' and today my friend President Donald Trump is starting his Indian trip with 'Namaste Trump' in Ahmedabad," he said.

"This is Gujarat but the entire country is enthusiastic in welcoming you," Modi said addressing Trump.

The prime minister said India-US relations are no longer just another partnership. "It is a far greater and closer relationship now. One is the 'land of the free' the other believes the world is one family. One feels proud of 'statue of liberty' the other feels proud of the 'statue of unity'."